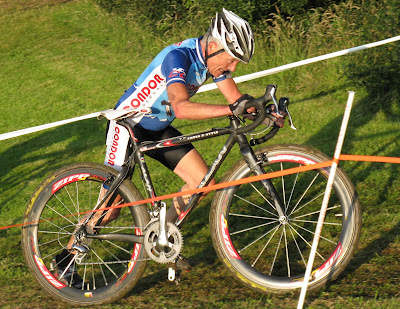 In what national seniors champion, Paul Oldham described as wet, cold and muddy conditions on a course near Barnard Castle yesterday, Grimpy (seen above in a summer league event) won the over 60's title in the North of England Cyclo-Cross Championships. This was an important step in his preparation for the British National Champs next month giving him important points towards the gridding system and made up for his disappointment at being beaten into the silver medal position by former 'Cross Pro Vic Barnett at the recent LVRC National Championships.

Good luck next Sunday John, in the 5th round of National Trophy Series at Peel Park, Bradford (1030hrs for the vets races)