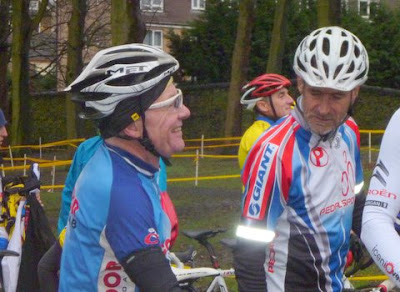 Being off the bike myself for a few days nursing a cold I decided to go along to Peel Park to cheer on Grimpy and Paul Daly, seen above looking relaxed and confident before the start of Sundays round of the National Series Cyclo-Cross. Once the starting pistol had fired I found a good spot to watch the riders struggling up an impossible to ride very muddy steep banking. The leaders passed by and I expected to see John and Paul not far behind but they were both towards the back of the field. Unknown to me at that time was the fact that they had both struck disaster - I'll let John describe what happened to his race ambitions - 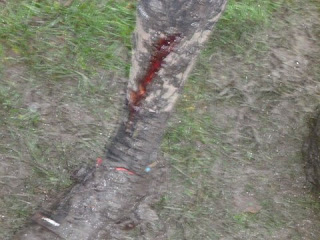 'You may recall me saying that my major hiccup on Sunday was caused by my pedal catching my shin as I performed a cartwheel. It felt painful but I kept going steadily only noticing the blood when I finished.
When I took my tights off I found a massive hole adjacent to my right shin 60mm long X 15 wide X 20 deep, nearly gone straight through caused by my outer chainring. I tried to clean all the crap out in the shower but to no avail. Noel Clough went to get 1st aid for me but no one came so Mark Gill took me to the event ambulance who covered it up and sent me off to A&E.

6 hours later it was confirmed there is no break and eventually a plastic surgeon ( a mate of Chris Hoy) put me together again and I'm hoping that theres no infection but it will be at least a week before I can walk again and 2 weeks for stitches to be removed so I may be back on the bike early January I hope. 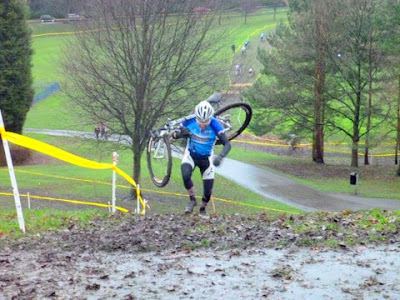 Bad luck for John (especially as he's just paid for his flights and hotel for the World Masters X Champs in Louisville, Kentucky in mid Jan).

Paul's problem should be fixed a bit quicker, he fell on the 1st lap damaging the rear changer on his new Ridley carbon 'cross bike and had to carry the bike round the course to the pits changing to his reserve mount before getting down to the job of catching up the rest of the field. He appeared to be doing so but then again went AWOL - yes he'd done the same again to his old 'cross bike - it may have survived six 3 Peaks races but but couldn't cope with the Peel Park mud and now he is in need of 2 new rear changers (good job he has a rich sponsor). Having no more bikes to change to he had to run a full lap carrying the bike but even in the face of such adversity remained philosophical to the end. 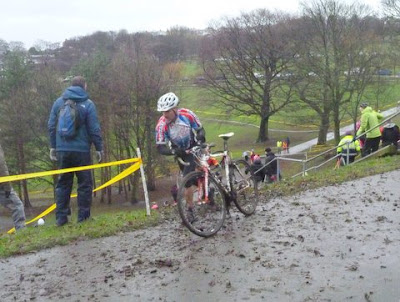 However it wasn't a bad day for everyone connected with The Condor, Simon Fortune's sons, Adam and Nathan both won their category's in the schoolboys races, well done lads!