Autumn Tour to the Lake District 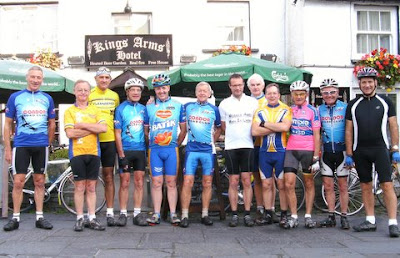 Brian’s De-training Tour, Hawkshead, 26rd to 30th September 2011
Report by Paul Gower
Day 1 -90miles 0900hrs pronto, Trevor Lever, Brian Sunter, Everard Rhodes, Peter Sutcliffe, Martin Gargett, Dave Saleem, Richard Hird, John Kaye, Neil Dyson, John Ginley.
This assorted bunch left Denholmegate at 9am prompt on a bright sunny morning with a howling tail wind. PG waved them off in his limo. Full of saddlebags, holdalls, sunscreen, shaving tackle & deodorant. Alas PG would not take ND's tool box containing 14lb sledge hammer, anvil, small furnace etc, saying limo would not get up the hills with that weight.
Morning coffee was taken at Hellifield Station Café after which they got lost in the back lanes whilst being led by BS.
Time was lost when DS broke a spoke (rear wheel, drive side of course). Brian redeemed himself for his previous detour mistake, the assembled bunch watched in amazement as he managed to get the wheel to rotate without catching the frame.
Half an hour from the lunch spot at Kirby Lonsdale the bunch received a wireless telephone call from PS saying that we had deposited the luggage in Hawkeshead digs and were riding into a howling headwind towards the lunch-spot at K Lonsdale.
After various bevies and panini's (recommended by Grimpy) we set off to Hawkeshead on a lumpy back road via Old Hutton, Oxenholme & Kendal. In Kendal DS decided his rear wheel needed more attention and was directed to a cycle shop by a lady cyclist. Dave took his back wheel into the shop whilst on the outside PG received another bollocking for not bringing the anvil and furnice etc. and the whole bunch were photographed by a passer by as they loitered on the pavement outside the shop for half an hour. On coming out of the shop DS was delighted, block off, tyre & tube off, new spoke fitted, wheel trued and all put together again, all for the princely sum of £4.00. (good job Dave didn't break a spoke back in Calderdale or else he'd have had to get new wheel, block, chain, tyre/tube all costing him £5 less than a new bike).
From Kendal, backroad through Crook to Bowness and ferry to Sawrey and Hawkeshead.
On arriving at digs a familiar bike is found in pub gateway and Hoppy welcomed us into the pub. Our bikes were given their own superior accommodation in a fully furnished holiday cottage. 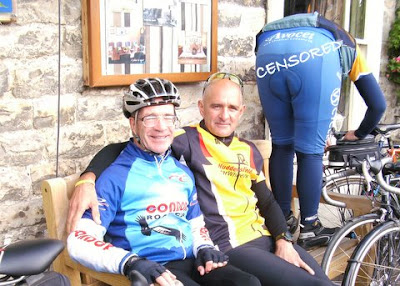 Day 2
Easy? Shorts & short sleeves weather. Hawkeshead - Sawrey then south in lanes, Bowland Bridge, through woods via Witherslack Hall then backroad to Lindale for pub lunch.
After lunch on through Grange-over-Sands, Flookburgh then lanes and woods to Haverthwaite. The lanes now had grass in the middle through Bouth, Colton (further refreshments), now very steep climbs to Low Nibthwaite then the east side of Coniston Water and over Hawkshead Hill and back to digs.
Day 3
Hawkshead, Sawrey, across on the ferry to Bowness and up through Troutbeck for morning coffee and chocolate at the Kirkstone Inn. Then down the Kirkstone Pass to Patterdale and left on Ullswater up to Matterdale End then down towards the A66 but turning left on a back road just before the main road. On to Threlkeld and left down St Johns in the Vale for sarnies and beverage at Stybeck.
After dinner we took the lane on the western side of Thirlmere re-joining the main road to go over Dunmail Raise and down to Grasmere for an afternoon liquid stop. On leaving the hostelry one of our elderly bunch of cyclists noticed a pint was being left only a quarter drunk so he took it outside asking who’s drink it was. ’Its mine’ says Neil (as quick as a flash) and then he supped it off just as a man came out of the pub demanding to know who’d stolen his beer. Fistycuffs were feared but only peels of merryment were heard as Neil dipped into the kitty to buy him another pint.
Further cycling/walking over Red Bank (to cheers from hikers) and down to Skelwith Bridge and back to Hawkshead. Lovely ride/scenery/weather. 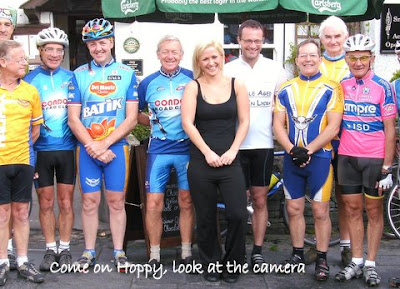 Day 4
Hawkshead, Clappersgate, Langdale and over Wrynose Pass - who rode all the way???? Most walked last 50 yards. Left at Cockley Beck and down the Duddon Valley for coffee at Seathwaite. Out of pub towards Ulpha but made mistake of turning 1st left to go over Stickle Pike. Seemed like a good idea at the time; young bucks rode with grace all the way to the top but the old bucks had to hoof it, admiring the scenery and identifying different types of sheep. Forward over the top and down to Broughton Mills and Broughton in Furness. Much to the amusement of the locals we did 3 laps of B in F looking for a pub with decent beer and sandwiches - we had to settle for decent beer at the pub and food in a café (which was very good).
Leaving Broughton turned left near Grizbeck, over the Giants Grave, Crake, Birks, Kendall Ground to Lowick Bridge. While on the tops a mobile phone incorporating camera, computer, record player and GPS had to be employed as we were totally lost in a maze of grassy gated lanes .
From Lowick Bridge straight up east side of Coniston, over Hawshead Hill to Hawkshead.
Dinner at another pub in the village where a lady from ‘why-eye’ land charmed the socks off th over 60’s 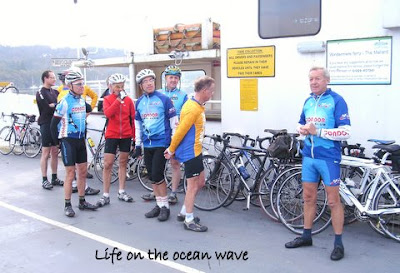 Day 5
All the troops set off early for the 90 mile journey home, PG & Pete S rode as far as Crook then returned via Sawrey to load up the car . Meanwhile the gang journeyed via Kendal, Kirby Lonsdale, lunch in Low Bentham hostelry (barmaid had to go to shop for sandwiches). Then a quick blast home via a Denholme watering hole, apart from Ev’s who took a short cut home via Gisburn.