This is Paul Daly's Fire Fighters World Champs report from last month. As most know Paul has now returned to New Zealand (so you can can now come out of hiding). An excellent report just spoilt by the fact I can't work out how to copy the photo's from the Word document.


When considering my UK holiday dates I included sufficient time to attend the World Championships if several logistics worked out. Having been plagued with persistent hamstring problems particularly in the lead up to and competing in the Masters Games in April would it flare up again or could I achieve the necessary training required to be in condition to defend my title from Switzerland 2015, there not being an event in 2016.


It was great meeting the old Vets Wednesday Gang and revisiting old routes, cafes and exchanging the usual banter! Pete my former partner in crime and principle architect in finding “interesting challenges” did not disappoint and we were soon riding the Yorkshire Dales in all its glory. The Tan Hill 200km (132mls) with 13000ft of climbing being a stand out day at the office but most importantly the severest test of the legs that would also indicate general all round condition. Thankfully it was a dream day perfect weather, fantastic scenery and very good 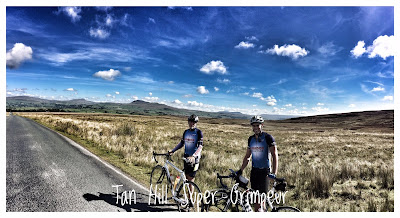 Yorkshire Three Peaks in the background.


I fettled the bike with new tyres, tubes, chain, brake pads and tightened the headset and soon all was good. Whilst not as nice (smooth or fast) as my 29er hung in the shed at home, several familiarisation rides later we were old friends. I also appear to be known for the condition of my shoes so I purchased a new pair of Diadora X Vortex Comp!


In the planning stage I noted that the race venue was fairly close to Mont Ventoux (Giant of Provence) and an iconic 23km Tour de France climb where the legendary Tommy Simpson sadly collapsed and died just 2kms from the summit. I asked John if he minded that we detour on route home to climb the mountain and cross off a bucket list item. Bless him at 74 years young he enthusiastically agreed.


Part of my preparation always involved arriving at the venue days before race day to allow total familiarisation with the course practicing lines, identifying hazards, assessing the climbs, checking out opposition and thinking strategy.


We packed Johns car with everything apart from the kitchen sink (somehow) and set off on the 300 mile journey to Dover to catch the ferry to Calais making very good time catching an early ship gaining an hour ahead of schedule. We pressed on for a further 100mls before checking into the motel to end a good day
We decided to use the toll roads on the journey down and after a long second day we checked into the motel leaving ourselves only 80 miles to the venue. Being from Yorkshire and cost conscious we had regular stops where we brewed our own and enjoyed fresh baguette, cheese and ham at minimal expense,


Arriving in Montignargues it was a hill top village with no sign of any motel/hotel accommodation, I asked John where were we staying and it quickly became apparent the school field set aside for camper vans was to be our home for the next three nights. We pitched the tent (including the toilet tent) near to a cold water tap (luxury) and we were set, including not showering for three days, does Froome operate like this!?


I was keen to explore the village and ride the course we registered met many old friends and rivals, prepared the bikes and set off to ride the course where it quickly became apparent it was very technical, rocky, serious drop-offs, narrow wooded tracks and loose rocky climbs. I rode ahead and waited for John at intervals to ensure he was okay. About half way around I became worried that he had not appeared so I started walking back to eventually find him walking toward me with a blooded nose deep grazes to his arms and legs and a punctured front wheel. He had pinch punctured and clipped a tree in the narrow woods that catapulted him over the bars. We walked back and the first class organisers attended to his wounds, thankfully none more than cuts, grazes and bruises. I left him and set off to complete the course.


I caught a couple of riders one I recognised as a French rival so I put an effort in and rode away from them (psychological advantage to me), just past where John had crashed I pinch punctured and crashed resulting in a few bruises!! The French lads came by and asked if I were okay (advantage lost). I walked back with serious concern regarding the puncture risk!


John had been patched up, we repaired the bikes and pumped the tyres hard.


The opening ceremony and pasta party was enjoyable but I needed to sleep as the race start time was 8am. The normal routine followed nervous anxiety, little sleep and up with the larks, breakfast, final bike check and repeat toilet visits.

The start of the race included a loop through the village streets a short country loop bringing you under the start/finish banner onto the main course. Being defending Champion I was seeded 1 and on the front row of six riders. I had warmed up well knowing I needed to be near the front going into the narrow woods.  The gun went off and but for a short period I was never headed I hit the first climb flat out and maintained it over the top where the drop off was loose and technical, as I turned the bottom corner I looked for the chasers and initially none were close I raced through the finish area and out into the streets where I could hear my Italian friends cheering and telling me to slow down.

I was on maximum concentration scrutinising the course looking for good lines (what there were) and keeping everything crossed. The big climb I had ridden in practice was faster to run cyclo-cross style and gained me more time. I had several offs slipping on loose chippings and dust and headbutted a low branch that failed to knock any sense in! The suspension control lever was badly positioned for me and sliced my hand on one of the offs but nothing to worry about.

Once I had climbed the last hill I could start to relax knowing if necessary I could ride any flat or run to the finish. As I approached the line I spotted John and caught and clipped him on the helmet before I crossed the line saving him another lap and it was over.

The ceremony was pretty emotional I never get over receiving the rainbow jersey, the national flag being lofted and the national anthem being played, all over in a flash really and the thought of never being there again always makes it more special to try and savour the moment.

Sharing the podium with two French riders Joel whispered that’s three times he has have been second to me so I promised him next year I won’t attend (hmm)?
Once again in Lynda’s absence I gifted my flowers too Chantel our very long time French friends and who we dined with that night along with Alain and Jo in their camper van. (I mention above more later), Gerard and Alain started telling us how one of the other riders in my category parked nearby had been dismissive of my borrowed bike as he was riding a new Specialised “S” Works etc. He promptly opened the window shouting at the rider that he could now swop bikes if he wanted, the French and a Suisse rider came into the van looking a little humbled and worse for alcohol giving me a cuddle and was very affectionate, I have raced them both several times before.

Sadly we said our au-revoir’s broke camp and headed for Ventoux.

In Bedoin we parked in the local Fire Station pulled out and assembled the road bikes (including my handbag). Looking across the valley we could see Ventoux where the top was covered by cloud, we set off riding through Bedoin at the start of the 23km climb.

We climbed steadily and the mountain was very busy with cyclists, motorcycles and classic cars having their own journey and after a magnificent effort by John we made it too Tommy Simpson’s


Memorial where we paused for piccies and thoughts. Then onto the summit 1904m for more pics and taking in the breath-taking views of area with a now beautiful clear blue sky.

We donned layers of clothing for the cold descent and were soon back at the car and thinking of where we might stay that evening?

I have climbed several big mountains and Ventoux did’nt disappoint and should be on any riders “bucket list” fantastic!!