As is traditional at this time of year I had better write up our ride by way of a few 'thank you' notes:
to Chris - for popping in home to make butties for our picnic. Anyone else would have stayed at home but Chris is a stalwart and provided turkey sandwiches at a moment's notice. He also was out despite having to ride stood-up the entire way (don't ask; let it suffice to say that Lance Armstrong used the same excuse for a raised cortisol level in 1999)
to Steve T - for sensible riding and flying the Condor flag so far from the bright lights of Brighouse (aka centre of the universe, apparently)
to Steve B - for coming out to join us at the Clarion
to Phil - for providing chocolate treats, and keeping his new gloves clean
to Gary - for getting a 2nd round of tea (and certainly not for attacking on every hill)
to Peter - for suggesting today's route and leading the way through the back end of Burnley
and to cyclists everywhere - Merry Christmas and Happy New Year! 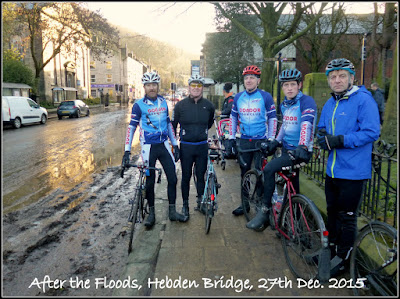 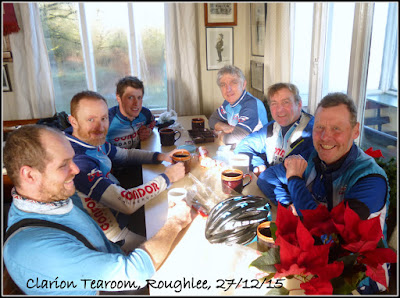 Richard Burnham 27 December 2015 at 20:05
Better day I guess than mine manning the flood defences in York to prevent my son's house flooding. See you new years day
Posted by Ian Robinson at Sunday, December 27, 2015