Weekend Report and Next Sunday 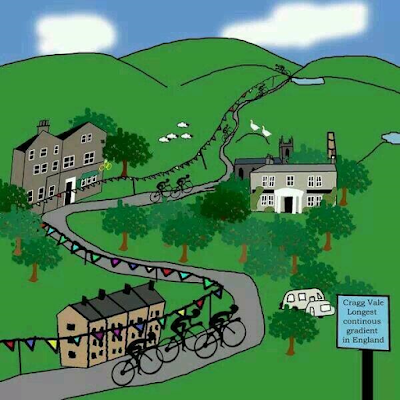 A busy weekend began with the Cragg Vale Spiral from the Robin Hood at Cragg Vale. This was the third running of the event, organised by CraggVelo's Jonathan Emberton  (see https://sites.google.com/site/craggvelo/home ). A wet and windy morning saw 20 or so riders assemble outside the pub for the 9am start, I'm sure the ride would attract many more if it were not held the last Saturday before Christmas but what the field lacked in quantity it made up for in quality. In addition to 4 Condors, Steve, ﻿Chris, Adrian Lord & myself, 3RT had sent a crap  crack team and the Imps had sent the Smith family, spearheaded by Sean, recently returned from a 2 year training camp in Australia and now enjoying some proper weather.
It was a nice steady start with Chris and myself at the front setting a pace suitable for me (not right fast) but it didn't last long, that tenacious little terrier from 3RT, Dom Turner, obviously having completely forgotten what happened to him last time (completely blew) put in a stunning attack and ripped the field apart. He was soon sitting up, looking back for help but the damage was done. I hung on for the 1st ascent but lost contact on the stiff little climb to the Beehive and then missed the turn down to Mill Bank so spent the rest of the morning pottering around by myself (bliss).

﻿
In fact, looking at Strava records the majority of the field were wandering around the maze of lanes between Baitings and Scout Road. Above is the correct route, before next years event we'll recce' the route and publish a .gpx file on the blog.
Chris however had no trouble following the route and led an elite band around successfully to finish for noon - he would have reported on the action from the sharp end but he unplugged his Wi-Fi router to plug in his Christmas lights and now can't remember his password.
﻿ 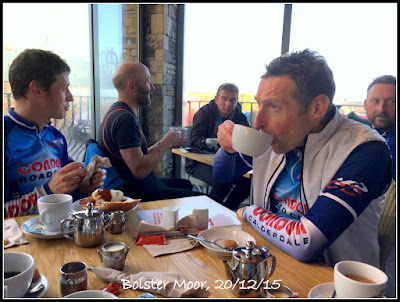 On Sunday it was the umpteenth Riley's Treat, again at the Robin Hood, but the one at Pecket Well this time. Its over 40 years since I first attended Riley's Treat  but I recall an uncle of mine who lived in the village telling me about how he helped out behind the bar in the 60's and how he had all on to keep Condors, including Eric Walker (who was there again this time - now in his 80's) and Hank Hoddinott, supplied with beer.
We had a good turnout, 8, Nigel, Mel, Ian, Robin, Richard, Chris, Garry Traviss and myself, meeting at Elland Bridge and taking breakfast at Bolster Moor café where we were joined by Ian Wellock. We then had a lumpy ride over to the 'do' stopping for refreshments at the Lane Ends, Old Town en-route where we found a variety of cyclists from VS, Batley Bill's, and even an odd Condor (Lumby) being led astray by quite a few Imps.
On arrival at Pecket Well there were dozens of bikes stacked up outside and standing room only inside. The West Pennine guys were there and it was good to see a sizeable contingent of 3RT having a warm-up for their own annual dinner due that evening.
The afternoons entertainment was kicked off by Chris who stunned the audience with a rendition of a traditional drinking song, most there had never heard Chris sing before and he was a revelation, a credit to the jersey, he and Paul Gower were certainly the stars of the afternoon. 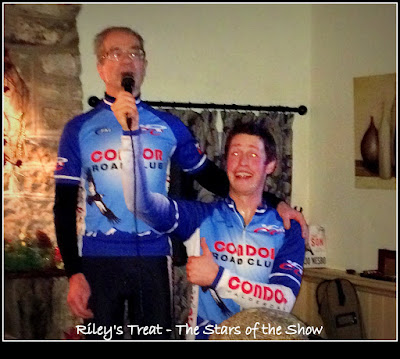 Next Sunday Neil from the Imps has an open invitation to Condors (and Imps) to his house for a seasonable celebration, he's got a big barrel of beer and his wife is once again preparing her famous pie. The Imps are meeting outside the Post Office in Halifax at 10am and all are invited to join them. Some of us Condors are meeting at Hebden Bridge at 9.30 for a trip over to the Clarion Tea Rooms before making our way to Neils.  He's expecting to be pulling the 1st pints at about 2pm so don't miss it, it will be Neil's last 'do' for a few years due to a lack of Sunday's between Christmas and New Year.
Posted by petehorne at Monday, December 21, 2015