Busy weekend coming up, its the Imps Hill Climb on Saturday on Stocks Lane (2pm). I understand there are about 30 entries including 6 or 7 Imps and our own Chris Smith. I'm hoping to be on the hill to give Chris some verbal encouragement and joining him afterwards in the Lord Nelson for the usual formalities. Not content with one hill climb he's down for the Lancaster 2 stage climb on Sunday, Conder Bottoms at 10am and Jubilee Tower at noon. Good luck Chris, I hope you're having a few days rest beforehand.
On Sunday its also the Classic 3 Peaks Cyclo Cross. Adrian Lord is once again representing the Condor and is joined this year by Robin Holt.  Adrian had a great ride in the event last year so here's hoping it goes as well for him this year. Robin was talking down his ambitions when he was out on the club ride last Sunday saying he intends to take it easy and enjoy himself. Sounds like a good strategy but not easy to stick to when you're surrounded by 650 who are racing. May the Gods smile down on both of you. 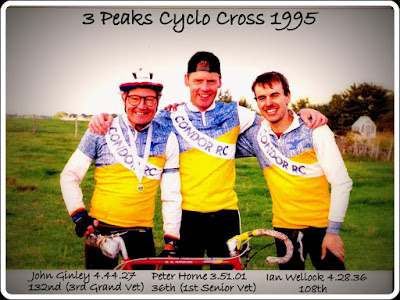 I can only think that the above photo must have been taken before the start of the 1995 event judging from the smiles and the clean kit. Lots of the same names can be seen on this years start sheet that were also taking part 20 years ago (but not the 3 in the photo who are not just older but also wiser). The 1995 event was won by Andy Peace in 3.08.00 (Andy also won the 3 Peaks Fell Race in 1995 in 2.52.52). A 20 year old Rob Jebb finished 5th in 3.21.43, Rob has since won the race a record 11 times and is favourite again this year.

As last year we are meeting at 8am Denholmgate or 8.30 Keighley to ride up to Cold Cotes to pick up the race. This worked well as we got there just as the leaders came down to the road from Ingleborough. We'll then be riding round to the finish via Chapel le Dale & Ribblehead giving us ample opportunities to admire the athletes in action and see the finish whilst enjoying a sandwich and a beverage at Helwith Bridge.
Posted by petehorne at Thursday, September 24, 2015