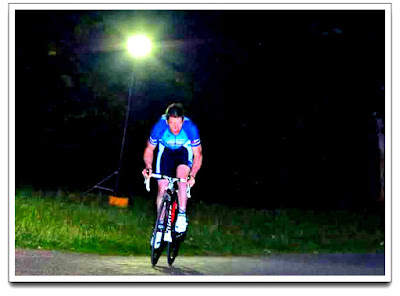 Chris rises to the challenge.
Above picture taken last Saturday evening﻿ at the Hardwick Hall Nocturne Hill Climb. Chris tells me it was a great event with floodlighting, loud music and cheering crowds. All sounds a bit too exciting for me. He says he felt strong recording a time of 1.46 against the winner Peter Cocker's time of 1.24.

Grimpy was also in race action at the weekend competing in the LVRC East Coast Road Race, the final counting event in the season long Percy Stallard Series. He finished 2nd in his age category to Bill Cotton, a result which means John has had to concede Series honours to the younger man.

The less competitive amongst us went on the Easyriders ride up to the superb café at How Stean Gorge. Due to the terrain it wasn't quite as easy as the previous weeks run up Wharfedale. The original plan had been to go straight up to Ripon and Masham on the fast but easy roads but the heavy traffic was spoiling the riding so at Pool we took a left and meandered up to Nidderdale on the back roads.
I'm delighted to report that Ian and Robin found their way to the start at Shelf to join Nigel, Richard, Oakworth Steve and myself. Mel joined in from the top of Pool Bank and we can blame him for leading us on a circumnavigation of Almscliffe Cragg through over a mile of fresh cow clap liberally coating the road surface (Robin was nearly in tears as he witnessed his beautiful new mauve coloured frame - and matching socks - and baby pink Rapha jersey, become splattered with blobs of brown). We even found a few lanes that Mel, our expert on that neck of the woods, hadn't been on before and arrived at the café well before mid day.
With 50 odd miles in before lunch we took a more direct route back to Calderdale choosing the lesser known Peat Lane to climb over to Wharfedale and thereby avoiding the dreaded Geenhow Hill. Richard, who had been lacking the super form of the previous Sunday, was unfortunate enough to puncture twice on the return journey but apart from that all once again enjoyed a super day in the Dales.

Posted by petehorne at Tuesday, September 22, 2015