I'm glad that the mtb ride went well for Peter but what's with the 71.5 miles! I though the MT loop was only 40-odd. Maybe our intrepid colleagues took a wrong turn at some point?

Meanwhile, the road runners had a lovely day out to Feizor as planned, going out by the 'flat' route over Attermire (taking great care on the descent into Settle) and back by the 'less flat' route down from Eldroth over Bowland Knotts, Elslack, Cowling Pinnacle and Slippery Ford.

Steve, Steve, Andy and Robin were out and hopefully had a good time. I'd say that the pace was rapid and unrelenting. Others might use less generous terminology. At least there were smiles when we stopped and had our photo took at the peak of our ride (note the clean and mud-free appearances). Soon afterward we met Dougie and John from VS doing the same ride but the other way round, so it was clearly the route du jour. The sky looks leaden here but the sun did come out closer to home. 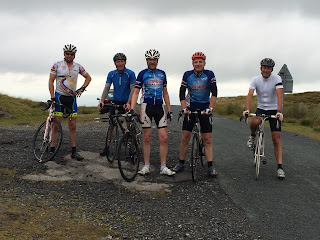 Now for the most important bit - our ongoing series of cafe reports. Elane's Tearooms certainly gets top marks for location, friendly and welcoming staff and an inviting decor and atmosphere. The wipe-clean seats are a bonus should any muddy mountain bikers visit these parts. They sadly lost points for the quality of the teacake which was in no way up to the task and just instantly fell apart, and for the seemingly deep-fried bacon which repeated unpleasantly for the next couple of hours. So I'd give an 'egg-rating' of 4 eggs out of a maximum half-dozen.

Robin was keen on Tatham Fells next week, but that could be too much like a repeat ride?
Posted by Ian Robinson at Monday, August 03, 2015