Sunday saw a good turnout, perhaps drawn by the prospect of an early coffee. However the group managed to split even before meeting up, with a break-away party going to the cafe in the market instead while the rest enjoyed Wetherspoon's finest at the Commercial Inn. One member of the breakaway group then broke again within seconds of setting off - a loud 'ping' echoing round as Stu sadly broke a spoke on his fancy wheels. Never mind, he arranged a lift home to pick up his spare and met us again later in the day. 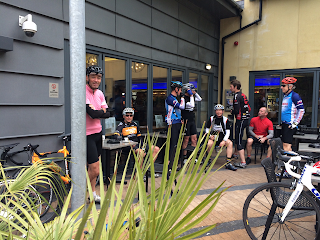 This route allegedly involves Mills but I didn't see that many. We did however see plenty of Hills. The only wet roads were through Wainstalls and over Fly Flats but by Oxenhope we were on dry tarmac and got away with it from then on. Over Herders and back over Widdop the pace was brisk but not supersonic, and Chris had the pleasure of sprinting up 'Big Jack' from the cattle grid to catch Brian Jennings as a welcome addition to our band.

Long Causeway was great with the rare easterly tail wind, followed by breakfast at the incredibly popular JJs Diner. This was my first visit but they only get a 'two-egg' rating on the butty-o-meter; to get anywhere near the top 'five-egg' award we'd have to be allowed to sit inside, the service would be quicker, tea should come in pots, and condiments provided automatically.

Bacup was next on the agenda, taken at a very modest pace in order to allow the butties to settle - which in themselves were fair enough but I doubt that the bacon was locally sourced from happy pigs. Sorry. Back to the ride. By Cross Stone I felt it time to retire and left my companions to enjoy the further ups and downs round Cragg Vale.

It was good to see so many out along with some occasional visitors such as Andy (mate of Oakworth Steve) who'd be welcome to come again. Andy that is; Steve the stalwart is there anyway!
Posted by Ian Robinson at Wednesday, June 17, 2015