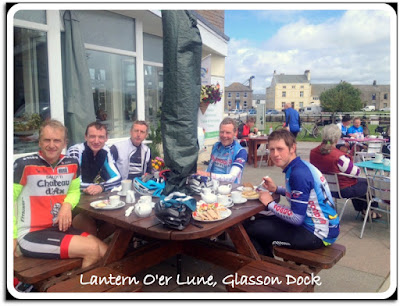 Not really mid summer weather, 9 degrees and a pretty strong westerly wind as I was riding out to the start of the Good Companions 200k Audax today. On arrival at Mytholmroyd Community Centre I was pleased to find that I wasn't the only Condor there, Melvin and Chris were enjoying a second breakfast, Graeme Brown was making a rare but welcome appearance, Carl Kershaw had been granted a rare Sunday passout and at the last moment Robin rolled up on his super new thoroughbred.
﻿ 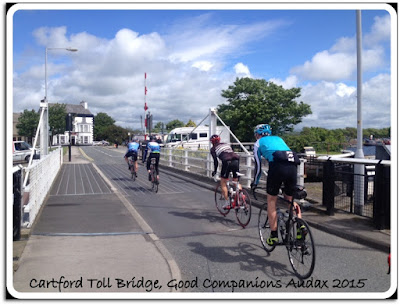 Our little band soon took to the head of the field and before long we had a great little group of good companions with the above named being joined by Lancashire lad, Nathan Poulton we pottered on in a disciplined manor ignoring the frequent showers enjoying a chat as the miles passed. Robin came up with some excuse about having to catch a plane to Athens and turned right at Ribchester to head for home via the Nick o' Pendle. We continued through Longridge, the Fylde Peninsula and Cockerham Sands to the re-invented Lantern O'er Lune Bistro at Glasson Dock where we met many of the 600 k 3 Coasts riders who had been at it since 6am on Saturday - I felt no regrets only doing the 200 (I'm getting old). After a too long but enjoyable lunch we set off on the return leg with a tail wind. Once we hit the Bowland hills over to Chipping I was found lacking and together with Carl we said goodbye to the fast boys who set a blistering pace to the finish. Another good day out, the change of terrain being a breath of fresh air. Thanks once again to Chris Crosland and his team and thanks to Graeme for the pics.
﻿
﻿ 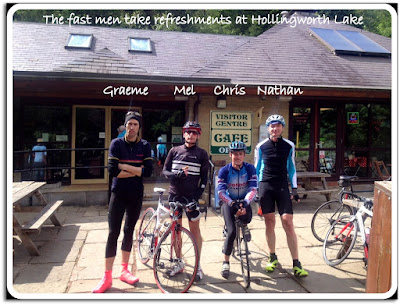 This coming Thursday, to celebrate mid-summer we're meeting an hour early for the MTB ride, 5.30pm at the usual place, outside Websters at the bottom of Hudds Rd Brighouse for a ride which will take us over Ogden Moors and Haworth Old Road down to Hardcastle Craggs and back on the canal bank - all welcome.
Posted by petehorne at Sunday, June 21, 2015