Spring into / Circuit of the Dales 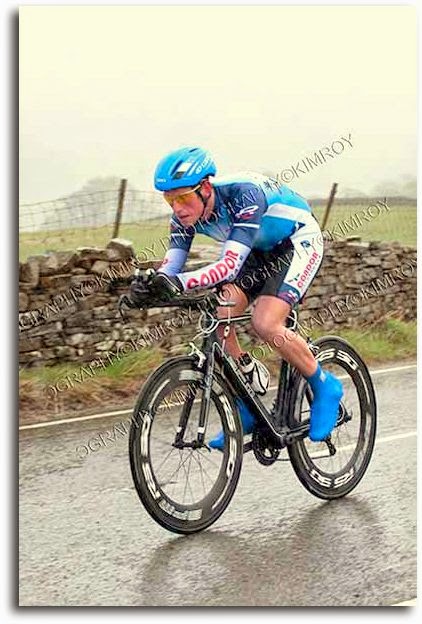 Well done to Chris who rode his new time trial bike in anger for the 1st time yesterday in the Circuit of the Dales 50 mile event taking 11th place overall in this classic event. I understand that the weather was pretty grim with strong winds, rain and hail ( all of which I suspect added to Chris' enjoyment of the event ). I look forward to hearing the full grizzly details from the man himself.

Whilst Chris was enjoying himself time trialling many other Condors were battling the elements in the Spring into the Dales Audax. For once I'd taken notice of the forecast and put away my best bike choosing instead full guards and saddlebag containing spare winter hat and gloves along with food and overshoes. Riding out to the start at Mytholmroyd I was joined by Robin who was dressed ready for what a Spring day ought to be like and riding his new X bike with 11 speed Di2 and hydraulic discs - ah well he wasn't planning to be on the road as long as me.
Despite the weather forecast we had a reasonable turnout, Adrian Lord, Paul G, Lumby, Mick White, Oakworth Steve, Vicar & Phil Haigh joining Robin and myself toeing the start line, a notable absentee being Mel, who along with Cancellara and Boonan has been absent from the recent 'monuments'. After spending several months chasing NZ Paul and Padiham Chris on similar endeavours my plan was to have a less urgent ride, which with Phil for company is what I did. We enjoyed lunch at Burnsall's Wharfe View Cafe  before battling blustery head winds and icy rain for the final 30 mile stretch. A memorable day out - just ask Phil.
Posted by petehorne at Tuesday, April 14, 2015