The shower and the lost sheep

Short version: we got wet at the start and lost the vicar at the end. A reduced group went to the Bay Horse in Oxenhope.

Long version: Setting off from home the sun was breaking though nicely and the day was full of promise. Then I got to Fly Flats and saw the wall of black cloud (Pete will tell you that it was just a light shower) headed my way and I enjoyed a 'refreshing' descent into Keighley. Sadly I wasn't the only rider at the start so had to continue with the club ride. Padiham Chris, Richard, Nigel, Oakworth Steve, Paul 'rides every' Daly, Damien were all present and correct. Feizor was mentioned, and so was the fact that its December so we're not chuffing going there. A democratic decision was taken to head for Gargrave first and hope the Cononley-Carleton back road would get some warmth back in our fingers. It didn't. So we went over from Broughton to Gargrave too, with Airton being mooted as a suitable breakfast venue with only moderate dissent (Feizor was mentioned again I believe but the wind was quite strong so pretending not to hear worked adequately here).

Riding along with sodden gloves, frozen feet and a chill headwind I was looking forward to reaching the cafe and mis-using a state of the art patented hot air hand dryer. Paper towels! Never been so disappointed to see them. But then a posh joint like Airton has under-floor heating so the bacon and egg butties were dispatched slowly while at least getting some warmth into the toes.

The return route took us  nearly over Attermire until Pete could be redirected on the right road to Otterburn instead. I was all for the long way round via Gisburn but el capitains directed us instead on a reverse of Spring into the Dales and then via Elslack over Cowling pinnacle avoiding all main roads or heavy traffic - especially Keighley. Or at least it does unless you are a certain club member with limited directional recall facilities and head straight on when you should be turning right next to Oakworth cemetery. Your clubmates could then stand around for a while, or go looking for you, thinking that you might be in a heap by the side of the road, but find nothing. By the point contact was eventually established (by one of those new-fangled pocket telephone devices) the group had split up and the day was done. Pete kindly sent me a text from the pub about the time that I was cresting the radio mast on Nab Water Lane (av. 17%). Being disinclined to acquiesce to his suggestion that we backtrack to the bar, I carried on home for a warm shower before taking ale in the Caty wearing more suitable clothing (lycra in public houses hasn't been banned yet but possibly should be).

Finally a couple of pictures. The first is an 'outtake' from last week - its basically the same chaps standing around but I like the informality of this unposed snap. The second is to illustrate the horrors of riding in California. I had to suffer down this quiet and pretty coastal road with a howling tailwind for about 25 miles (its a short part of highway 1 which runs from San Francisco all the way down to LA). 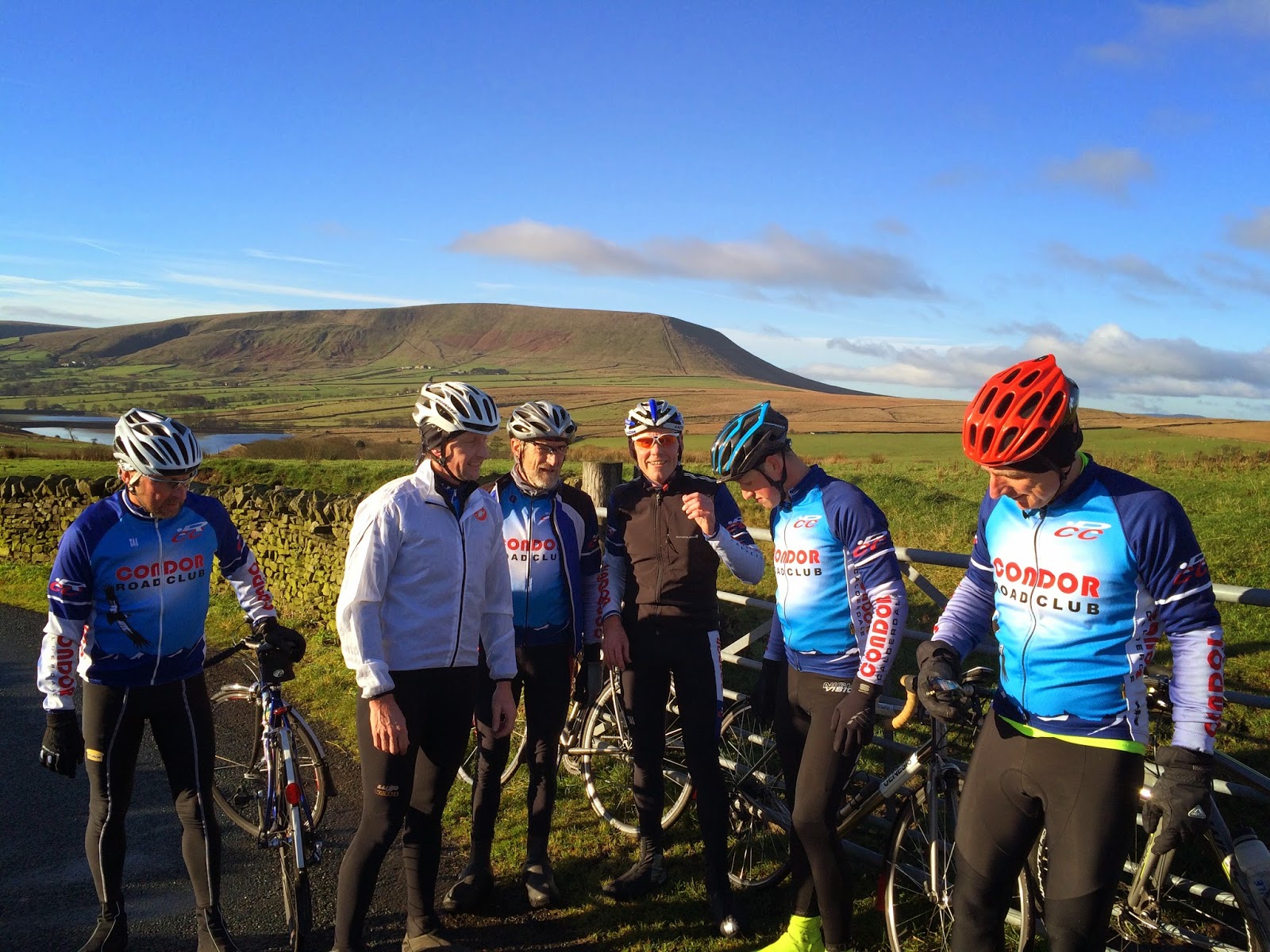 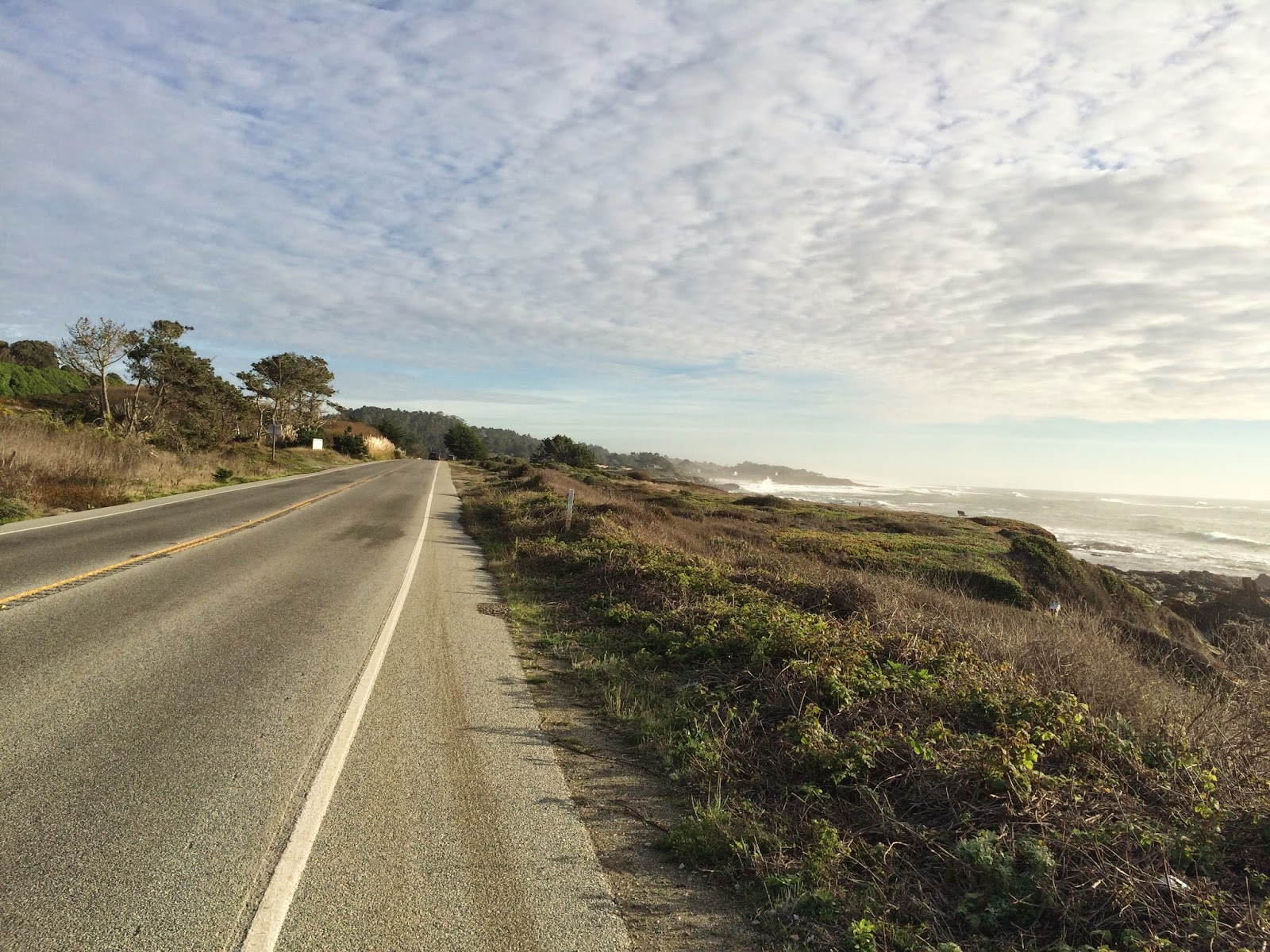