Thanks to Ian for last Sundays ride report, but I still believe that the B E & S sandwiches at Feizor are better than Airton, but never mind, it was another good day out and the tail wind up Cowling Pinnacle made the early soaking all worth while.

RIDE OUT LUNCH & AWARDS CEREMONY
It was decided at the AGM that this winter we would hold our awards ceremony as a  ride out lunch rather than an evening dinner/dance. Early January was mooted as a suitable time of year for the event and the Robin Hood at Cragg Vale have agreed to host the event with a Bernard Hinault style buffet on a Saturday or Sunday of our choosing. However a January date is problematic with several prominent members being away for the month cruising the Southern Hemisphere (as prominent members do) and another engrossed in preparation for assaults on National and World Cyclo-Cross titles............so we're looking at early February instead.

THE ROUND ROBIN CRAGG SPIRAL
Its back - the 2nd running of this event, promoted by Cragg Velo's Jonathan Emberton. 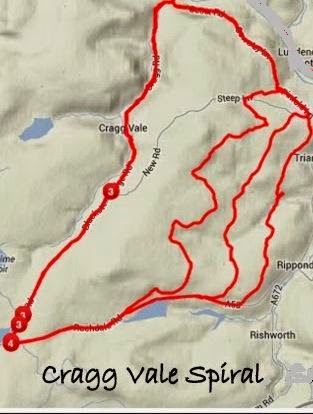 Saturday 20th December
Second Running of ...
'The Round Robin Cragg Spiral'
75/50/25km and never more than 5 from the Robin Hood.3 climbs of Cragg on the full route with 3 different return routes through the Sowerby Lanes.
9am start - Robin Hood, Cragg Vale
Food and social at the Robin after.