Slide into the Dales

The sub-zero temperatures scuppered the original plans for Sunday. My intention was to start with the Ilkley CC lads at 8.30 for Halton Gill and then join the Condors at Feizor but with minus 4 and a freezing mist hanging in the Wharfe Valley they changed plans and after a circuit around Skipton with them I met the 7 Condor stalwarts at Uttley. Pete Smith, Pete H., Ian, Nige, Damian, Steve and Chris.
It was decided that, dismally, the main roads would be the safest policy but after Gargrave we were lured onto the quiet lanes to Bell Busk where we found our first ice flow - dumping Pete Smith from his lofty perch painfully onto the ground. Nursing a sore hip Pete decided to limp homewards and after Ian and Chris had also been horizontal we were all very twitchy and reduced to walking at the first sign of any shiny bits.
This slow progress resulted in us being thoroughly nithered by Hellifield and so we headed for a warming at the railway Station Cafe there.
After tea, butties and talk of railway things we lined out and headed down the main road to Gisburn and through Barnoldswick, Foulridge and the back lane to Laneshaw Bridge. Despite the temperature rising to a balmy 1 degree we played it safe and avoided the Herders instead taking the main road over the Moss where Pete H installed himself on the front in order, I suspect, to keep Padiham Chris off it.
I turned at Steeton to return over the Cringles after a steady and sensible ride - even Damian was holding back, perhaps tempered by his ride with the chain gang to Buckden the day before - unless it all kicked off after I left them ?! 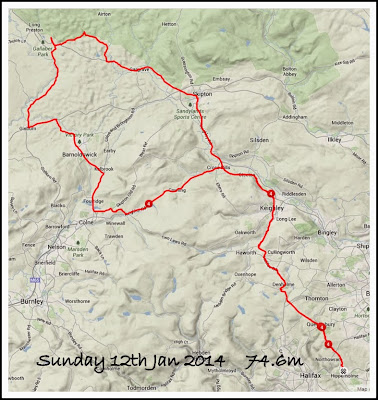 Next Sunday - another attempt at Feizor perhaps ?
Posted by Mel at Monday, January 13, 2014