Usually I only make the ‘car assist’ to this part of the world in late September to ride the Three Peaks cyclo cross. The Three Peaks starts in a sea of adrenalin and apprehension so it felt good to settle gently in to the climb of Cam High Road, with the prospect of a ride advertised by Pete as ‘a rest day’ in what could still, just about, be described as late summer, 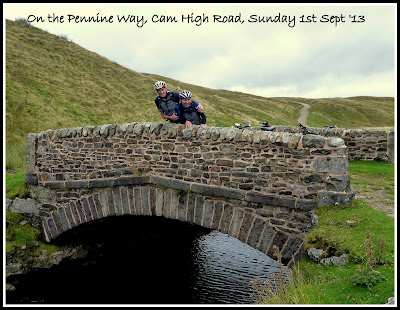 I was joined in Horton, by Phil and Pete. We made our way over Cam High Road, and Fleet Moss and then rattled down the arrow straight Roman Road to Bainbridge where we recharged our batteries with bacon sausage and egg baguettes at the village café. First rate café first rate food and first rate service – well worth a visit but note, not in winter as it only opens during the summer season. There was general agreement that Bainbridge offers a much better option for a Wensleydale café stop than Hawes which is overly busy and full of the wrong type of cyclist (ones with motors). 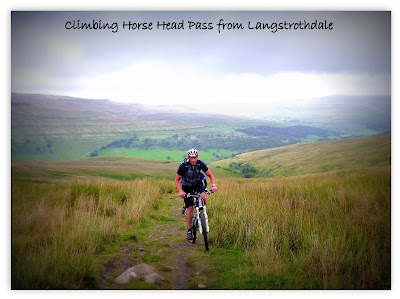 Our ride continued very much as advertised by Peter in his pre ride blog with a fair amount of pushing and grumbling (by me) especially out of Foxup and over Foxup Moor before we picked up final part of the Three Peaks descent of Pen Y Ghent and back to arrive back Horton. 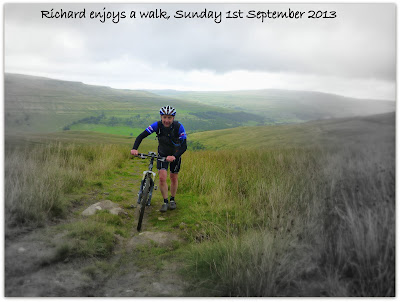 My Strava tells me four hours 39 minutes in the saddle 36.7 miles covered and 4,488 ft of climbing. Looks like a relatively easy day but by Phil’s mileage calculus each Horton “off road” mile is equivalent to approximately two regular miles and so he’s instructed me to adjust my training diary accordingly.

Finally a word about our post ride recovery drinks, Pete asked me to mention this - not quite sure why. Luke warm coffee from a flask for Pete, whey protein shake for me - not being a full time cyclist I need all the help the Science in Sport boffins can provide.

reply.................petehorne 06/09/13
Thanks for the post Richard - I noticed that those who had the whey protein shake, to aid recovery (I've read about such things in mags but didn't thing anyone took any notice), failed to turn up for Monday evenings mountain bike ride - there were 8 out though and its got to the time of year when big lights are needed - we're going to give it a few more weeks though unless the weather makes MTBing unpleasant.
Posted by Richard at Thursday, September 05, 2013