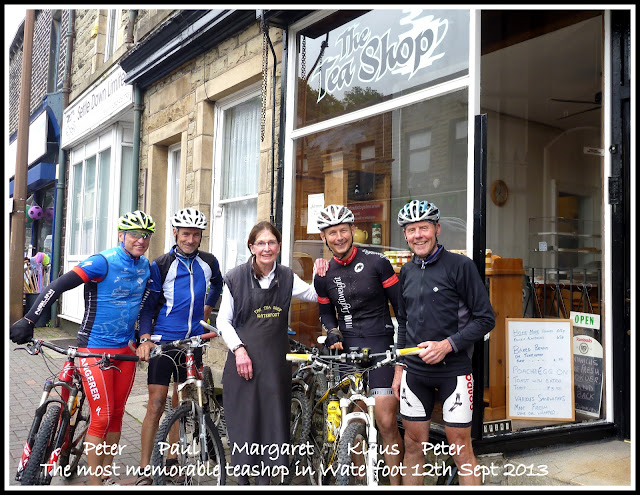 It was a hardcore day for Paul and myself yesterday as we guided 2 of Big Phil's Austrian friends round the Mary Townley Loop.  Phil, who had been unable to get the day off work had asked me take his mates, who were in the UK for a few days on business, out for a ride on their mountain bikes. I told Paul that I was going to take them on the MTL having it in mind that if they weren't up to it there are plenty of opportunities to cut short and return on the road and he agreed to share this onerous responsibility.  As we waited to meet them at Calllis Bottom I jokingly suggested to Paul that Phil may have set us up for a hammering but he dismissed such a suggestion doubting that foreign businessmen would be up to such a challenging route.

A moment later they arrived, when I saw their shiny shaven legs exiting from their hire van I wondered if perhaps they weren't novices, then they got their state of the art bikes out of the van I hoped that it was a case of  'All the gear but no idea', but in reality could see from looking at them that this was unlikely to be the case.

We set off in the clockwise direction up through Callis Wood towards the Pike with Paul intent on testing them early, they passed the test, I didn't.      In short we had a bloody great days riding with the highlight being our lunch break at Waterfoot at a cafe like no other, a cafe who's fame will soon be known throughout the Tirol.

Klaus and Peter were great company, full of life and enthusiasm and delighted with the MTL. Their enthusiasm lasted late into the evening as they forced us to drink beer at Hipperholme's Cock o' the North Shed - a memorable day!

SUNDAY 15th Sept
A lousy weather forecast so unless someone comes up with a better idea I suggest a steady potter up the Dales, 8.30am Denholmgate / 9 Keighley.
Posted by petehorne at Friday, September 13, 2013