John appears to have had a perfect day at the 14th Tour of the East Coast Road Race on Sunday. Already the joint leader in his age category in the season long LVRC Percy Stallard National Road Race Series he was keen to use this penultimate race in the series to pull away from the opposition and did so in the best possible way by taking 1st place from Tony Woodcock with our own Brian Sunter 3rd.  I look forward to hearing a blow by blow account of the days racing.
I see from the list of finishers on the LVRC web site that Pete Smith was also up there flying the Condor flag and there was a Melvin Hartley finishing 22 seconds behind the winner of the 40 to 50 age group race, could this be our own Mel? if so is he getting younger? and how long will it be before we see him riding in the schoolboys races?

As our members will know, a month ago Simon Fortune became the first Condor member to complete the 1400 km London-Edinburgh-London Audax. Simon battled through adverse weather to finish with an excellent time and although he is far too modest to write about his 3 day epic I have managed to obtain a photo taken at the finish which appears to illustrate that he hadn't really been trying. 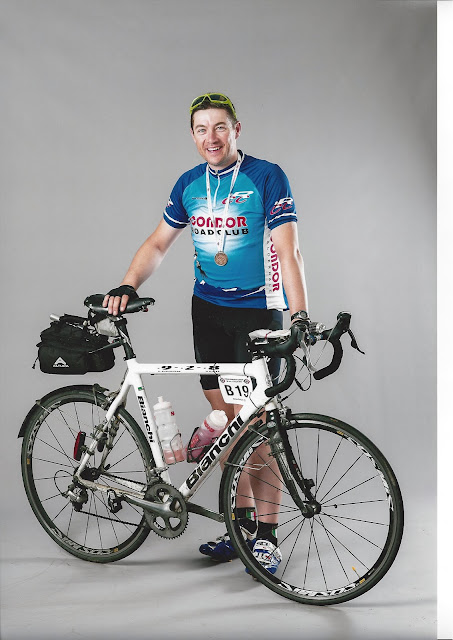 Unfortunately due to his fall the previous day Simon was missing from Monday evenings mountain bike ride but there was a good turn out of 11 for a great route in Kirklees led by Bob Norbury's son, Dean.
We have a few good off road riders coming out, so good that even Paul Daly has to get out of the saddle occasionally. A few of them had ridden the Holme Valley MTB Challenge on Sunday including 21 year old Jack, who had finished 3rd fastest out of the 400 riders. Richard had also taken part but wasn't happy being a few minutes slower than the previous year - I've tried to explain the ageing process to him but he's not keen. Anyway I found this photo of him riding the event and he wasn't even riding a Mountain Bike 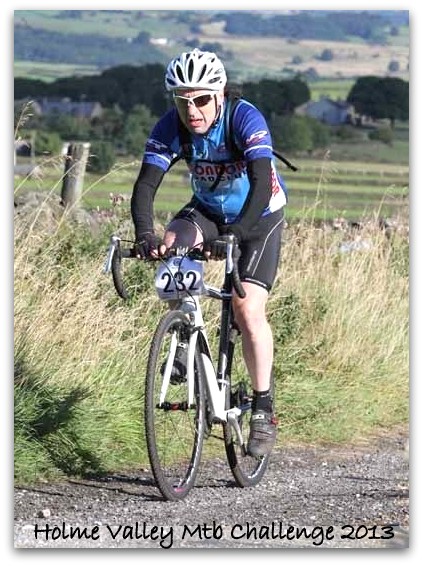 Mel11 September 2013 14:46
Yes Peter - I was that man !- but finished around 18th in the C category race, not A/B's. Such are the vagueries of the LVRC results. (You did well to find the result because I couldn't.)
It was a last minute decision to ride after Ged Millward offered me a lift out. As usual I was strong on the climb but lacking the racing speed & jump for the rest of it.
Congrats to Grimpy who certainly has good racing legs at present.
I'm missing again this weekend - taking daughter to Uni. The mountain bike is fettled in the hope of joining with some rides soon.
Posted by petehorne at Tuesday, September 10, 2013