Bank Holiday Monday saw Brian continue his stellar season adding another national championship to his long list of honors .  On a course based on the A66 in the north Lake District he took the gold medal at the 2013 VTTA National 50 mile Time Trial Championships. Incredibly he won the event on age standard by over 4 minutes from the current over 60's 50 mile national record holder, Peter Greenwood of Clayton Velo.  Well done Brian and good luck at next Saturdays national 10 champs down in Cambridgeshire. 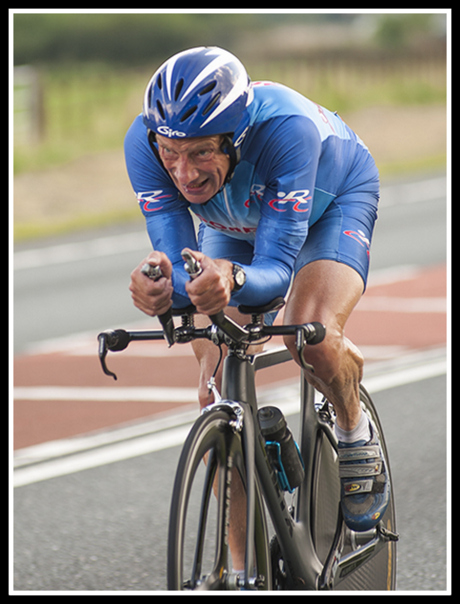 It was good to see 9 out on last Sundays ride up into the Dales. Ian is quite correct stating the the Cove Road climb was keenly fought, Graeme took a flyer at the foot of the climb and had such a gap that, although I witnessed Mel and Robin take up the challenge I had assumed that he had taken the honors. Myself, Pete Smith, Big Phil and, to my surprise, Damian, knowing we had no chance of victory rode up at a more sensible pace.
Graeme turned to head for lunch at home from the summit and Robin and Mel chose the Darnbrook road towards Littondale so the Feizor group were down to four. By now the weather was superb and the Dales were looking gorgeous as we headed over to the Silverdale road and down to Stainforth making our way over the packhorse bridge to Feizor via Little Stainforth and Austwick.
Elaine's Tearooms were, as ever, spot on, and yes, Phil managed to consume their full breakfast although the success in this sphere caused him to forget the combination for his bike lock and standing watching him attempt to unlock the bikes for about half an hour did nothing to eliminate 'cafe legs'.
Once mobile again we went for the fast route home, Wigglesworth, Bank Newton, Connonley Bank and Ingrow.

Whilst most of us were enjoying our cycling nearer home last Saturday Grimpy was riding down the Promenade des Anglais in Nice celebrating being the oldest finisher on the 6 day Haute Route Alps. Sounds like a magnificent route over many of the iconic alpine climbs although he was grumbling a bit about tired legs on todays vets ride.