Saturday in the Lakes 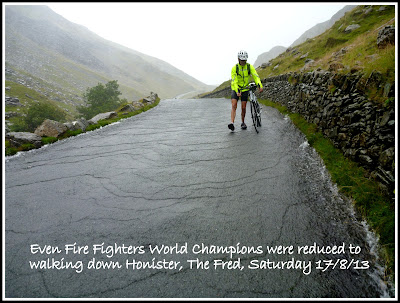 Despite the poor weather forecast Paul and I were joined by Big Phil and Damian in the Wheelbase car park at 8am for our Fred Whitton ride.  Spirits were high as we sauntered over Kirkstone Pass, a full day of cycling heaven ahead of us.  We ignored the aroma of frying bacon as we rode through Patterdale and were soon over Matterdale End and freewheeling down to the A66 for a less than enjoyable ride down this super-fast highway to Keswick.
Unfortunately by now the weather forecast was proving more accurate than we had hoped and the precipitation was chucking down so instead of a quick visit to Greggs to sample their magnificent sausage rolls and a Coca Cola we dripped wet clothing all over the tables and upholstered chairs of a coffee shop where we sat for an inordinate amount of time waiting for the bacon to cure and the hen to lay some eggs whilst watching the rain get heavier.
By the time we set off the sight of Derwent Water was making me feel sea sick, however, undeterred, we progressed south through Borrowdale and up the Honister Pass where the roads resembled rivers and upon reaching the summit the winds were gale force. The descent from the slate mine was treacherous, the road surface being akin to black ice causing even Paul Daly to walk the steepest part of the descent.
As I walked down Honister and struggled to avoid being blown over as the winds gusted down the valley towards Buttermere I did wonder whether we ought to shorten the route but the boys were so full of enthusiasm after the Newlands climb that such negativity soon evaporated as Phil and I watched in admiration as Damian and Paul battled for supremacy  over Whinlatter Pass.
The rain bounced down as we passed Loweswater and that always harder than you were expecting climb over Cold Fell with its extensive views over Sellafield and out to the Irish Sea. Paul had promised me that the weather front would have passed over by 3pm and at 2pm it looked as if he may be correct.
At Gosforth (where the annual agricultural show had been a washout) we took a break at the cafe above the Spar shop (don't have beans on toast - only a teaspoon full of beans - but the cake was good). Once fed and tea'd we were off towards the coupe de grace, Hardnott and Wrynose.   In Eskdale, it was not raining but the roads were still wet, running with water and flooded in the dips. Looking ahead and seeing the mountain road glistening before it disappeared into the mist I was less than confident that I could conquer them without getting off the bike. Paul and Damian dropped Me and Phil before the cattle grid near the start of Hardnott, I didn't chase them, my priority being to get up without walking, Hardnott doesn't get any easier but I was pleased to once again make the summit staying on the bike and now knew that I would be able to do the same on Wrynose. Phil passed me half way up, I gave him some cheery words of encouragement and he mumbled something about being on his limit but slogged on to the top.
The rain by now had returned and the descent down to Cockley Beck interesting to say the least.  Pauls yellow jacket could bee seen ahead on a lone attack of Wrynose but Damian had waited for Phil and I on Wrynose Bottom only to attack us once the road to 3 Shire Stone got steeper. He gapped us by 30 or 40 metres but then stopped, got off and began walking. Well; the man who had been on his limit was suddenly blessed by the gods with previously unimagined  power as he chased down and overtook the distressed window washer.
Once at this last summit it is usual consider that the days work is over but for me that wasn't the case. With both brakes on as tight as possible I was still accelerating down the 1 in 4 slopes towards Little Langdale so much so that I had to ride in to a grass verge to bring myself to a halt and once again I resorted to walking a descent as the rain got heavier and heavier.
Once reunited we pottered back to Staveley where we all agreed that it had been an epic day out and one day we may even try it in good weather. 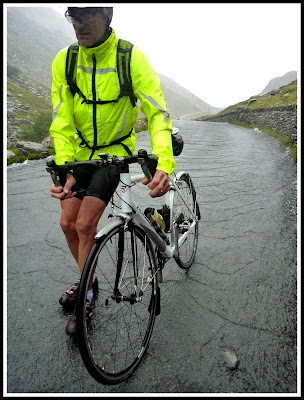