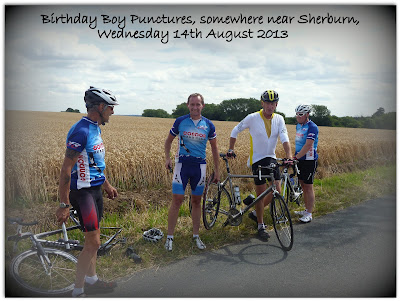 Due to holidays and Peak District Audax's we were down to a dozen for today's vets ride. The pensioners were joined by several members of the working classes including Neil, now well back into his annual comeback and riding faster and stronger every week; Martin Gargett, as ever, looking lean and mean; Phil Haigh, deeply tanned from a recent holiday in foreign parts and looking resplendent in his new Condor jersey and the birthday boy himself, Damian, celebrating 46 years of this mortal coil and intent on reminding the old fogey's of the joys of (comparative) youth.
However Damians plans were somewhat thwarted by the route choice which resulted in him not having a clue where he was for most of the day.   A pioneering route was chosen which took us down the Greenway to Ravensthorpe and east from Dewsbury on the new cycleway through Earlsheaton tunnel and up the Alpe d'Huez to Ossett.   From Ossett, guided by the wonders of satellite navigation, we found our way to the Trans-Pennine Trail at Stanley which was enthusiastically followed to Methley Junction and on to Castleford. It was on this section where the first of the days 8 punctures occurred, Hoppy's rear Pro-4 ('its only done 3000 miles') proving no match for a thorn.
Unfortunately this set the theme for the day with Phil managing a pinch puncture after hitting a pot hole on the main road up to Allerton Bywater. On the road through Fairburn Ings the unfortunate combination of Paul Daly and Damian hit the front of the peloton together (note: must never be allowed to happen again!) it always looked dangerous and so it proved with speeds in the high 20's and neither willing to give an inch despite the pleading of a current national G category Criterion Champ. On reaching Fairburn heart rates and adrenalin were allowed to subside as Mike, for no apparent reason fell off his bike and Hoppy punctured again.
Time was getting on so an alternative to the intended lunch spot at Tadcaster was found at the motor bikers cafe at Newthorpe  but not before Damian managed to have a flat and, I'm not sure why, blamed me ( it may be because he usually punctures or brakes a spoke, or both, when he comes out with me).  At the cafe decision was made to go for a shorter and easier route home than originally intended  and we returned via Castleford and the usual route to Tingley, Dewsbury and the Greenway with several more breaks for for even more punctures and a fall.

Well done to Brian who last Sunday rode away from the field to take the honors in the VC Nottingham 'Ey Up Dave' LVRC road race with Grimpy taking third.

This coming Saturday Paul and I are intending to go up to the Lakes for a potter round the Fred Whitton. A final decision whether to go up there or not will be taken based on the weather forecast on Friday - its intended to be an 8am start from Staveley.