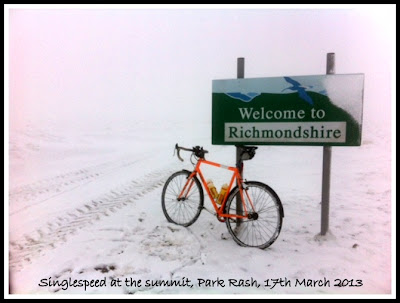 When I left home at 5.30 this morning the weather didn't seem too bad and I was optimistic that conditions were, as often is the case, going to be much better than forecast. However this optimism didn't last long, as we crossed the border into the red rose county we were greeted by sleet and snow. It was a 7.30 start from Pendleton Village Hall and myself, Big Phil and Padiham Chris signed on as part of a field of about 40. Single Simon also attended but his heart was not really where it should have been for a mountainous 129 mile ride, indeed he had to be persuaded not to go straight home.
Our Condor quartet took the front places in the peloton as we headed north east up the A65 and onto the back roads through Bank Newton, the weather at this time having improved with breaks in the clouds again raising my hopes that spring may arrive this very day. As we a were approaching Gargrave Phil stopped to put some air into his back tyre - it didn't stay in there long and we stopped again whilst he changed the inner tube. Simon, concerned that he may have to walk up Park Rash continued.
Once mobile again we were soon moving well and passing most of those who had passed us during our enforced stoppage. We were moving well in the Park Rash foothills and were about to attack the 1 in 3 start of Park Rash proper when I heard a familiar voice from behind, 'Cone on, get a move on'. It was Melvin, whats more it was Melvin on his best bike. I had been quietly relieved when he hadn't turned up at the start thinking it would make the day a little (in fact a lot) easier. 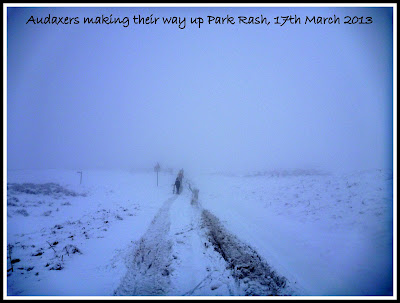 Viewing the hills on our approach there was a very obvious snow line in the hills at about 1400' but in my innocence I had convinced myself that the road would be clear - as you can see from the photos I was wrong. Our little grupetto climbed very well but it was the descent into Coverdale that proved to be more of a problem, having promised my wife that I wouldn't fall off today I had to walk, I wasn't alone, only Phil managed to ride down the hill. Once into Coverdale the weather brightened up and cycling once more became a pleasure. We re-joined Simon at the Middlham check where we had a brief stop to collect proof of passage receipts. On the Road to Leyburn Simon was seduced by a signpost for Aysgarth and dumped his team mates for an easy ride returning to Pendleton via Bishopdale and Wharfedale. The rest of us stuck to our guns and crossed over to a temperate Swaledale where we had a rather longer than planned stop at The Dales Bike Centre cafe at Fremington. 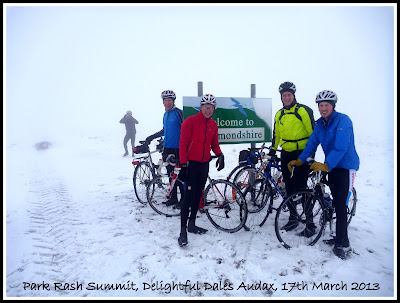 After a long leisurely lunch Mel said his goodbye's and headed towards home over the hill towards Castle Bolton and Bishopdale whilst Chris, Phil and me headed up the most beautiful dale in the Dales and over Birkdale Common to the next check at the pub at Nateby. We loitered there for a while, but not too long, I'd not found it easy getting going again after our Fremington sojourn and knew how difficult Mallerstang Common is with a head wind - I wasn't wrong and Chris spent almost the whole distance at the front winding it up on the big ring whilst I was struggling on 34 ring. They pulled away from me approaching Garsdale where we turned right at the Moorcock, I was 100 yards or so behind and didn't know whether to laugh or cry when I witnessed them ride straight past the left turn for the Coal Road, a detour to Sedbergh wouldn't have been a good idea, I shouted and shouted but they didn't respond and there was no chance of me chasing them down. I stopped at the junction, I could see they were looking back so I jumped up and down waving my arms till I saw they were returning.
The Coal Road wasn't quite as bad as Park Rash in that we were able to follow narrow tyre tracks between the laying snow and once down into Dentdale we saw no more snow. As ever the climb up Newby Head was a hard pull but after what we had been through earlier the rest of the route, down Ribbledale to Settle, Wigglesworth and Sawley was a breeze.
It was good to get back to Pendleton Village Hall.
Posted by petehorne at Monday, March 18, 2013