Five Condors turned up for last Sundays ride, Robin, Simon, Mel, Oakworth Steve and myself. Our numbers were initially more than doubled by the Paul Milnes group who were meeting in Keighley, we stayed together until the drag out of Skipton on the Grassington Road where fragmentation's occurred. I managed to hang on till after The Craven Heifer but then found myself on the wrong side of a split as the pace failed to ease. This was worrying for me as I'd forgotten to put any money in my back pocket and I was witnessing my only hope of a lunch sub disappearing up the road. My new companions turned left at Rylstone leaving me chasing alone into a cold head wind wondering where my next meal was coming from. Fortunately someone noticed I was missing took pity on me and the group waited for me at Cracoe from where we went to the Old Schoolhouse Tearooms at Hebden via Grassington, Des Fretwell and a young lad from Coniston Cold, Tom, having stayed with us from the Milnes group joined us for lunch.
Our return journey was made via Appletreewick, Bolton Abbey, where Robin had a panic attack realizing we were heading in the direction of Bradford he swiftly turned right towards the security of the Calder Valley. On to Otley and Guiseley where Steve, Des and Tom said there farewells as Mel came down through Esholt to leave us at Shipley for a return home through Baildon. Simon, back on single free this week after a disastrous foray into the world of derailiers and double clangers for the previous weeks Imps Reliability Ride, was moving well and causing me all sorts of problems as we made our way up Manchester Road and down through Wyke, I was relieved to get home, open a bottle of beer, put my feet up and watch the Tirreno-Adriatico on the box.

The weather was kinder on Wednesday with sun and blue skies for most of the day although there was still a nip in the air. There was a good turnout and we planned to take advantage of the easterly wind on the return journey so we went out to Tadcaster for lunch via  Headingley, Shadwell and Bramham. A pair of Pauls with a total age of 140 set a good pace all the way out there whilst Grimpy was the main protagonist on the return journey half wheeling Brian down through Sherburn, South Milford and Fairburn. 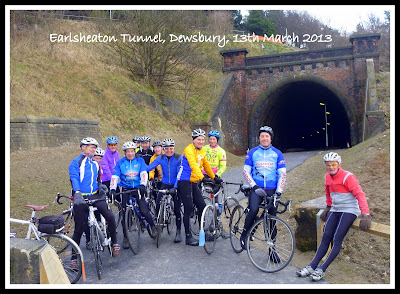 An interesting diversion was made when Chris from the Imps introduced us to a recently opened section of cycleway which took us from Earlsheaton to the middle of Dewsbury including a 150 metre or so railway tunnel. This whet the appetite for cycleways so we kept to the Calder Valley and Spen Valley Greenways all the way to Low Moor.

Myself and Big Phil have entered the Delightful Dales Audax this coming Sunday, others are considering joining us depending on the weather - it looks like a great route, starting at Pendleton (near Whalley) and making its way to Kettlewell and over Park Rash, down to Middleham, Leyburn, Reeth, Keld, Nateby, Garsdale, Coal Road to Dentdale then Ribblehead, Settle, Wigglesworth and back to the start - can't believe thats only 127 miles.
Posted by petehorne at Saturday, March 16, 2013