First of all a get well soon message to Sandy who was run down by a car that failed to give way from a side road as he was riding down through Portsmouth (not the Hampshire one) on Friday - bruised and sprained but nothing broken (except his bike). 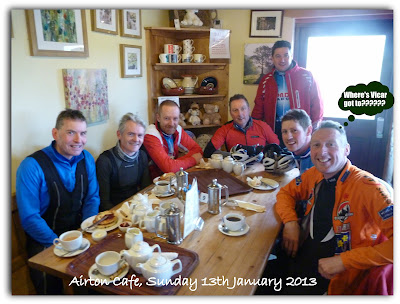 Numbers were down this week but the quality was there. I set off a bit early in case it took me longer than usual to get to Denholmgate but a bit of a tail wind got me there at 5 to nine so instead of hanging around for ten minutes getting cold then getting dropped on the way to Keighley I kept going and met Mel at the roundabout. We were eventually joined by the above athletes plus Richard (who was late for the official photo shoot).
The route for the day was Arncliffe, Darnbrook, Malham and down to Airton Cafe. Simon and I nearly missed the boat as, in company with the Milnes lads, a brisk pace was set to Skipton. On hearing the route the Milnes boys promptly turned left on the approach to Skipton looking for less demanding pastures.
On the advice of my personal trainer (aka 'The Wife') I had never intended riding the full route so when Mel, Pete, Padhiam Chris, Richard and a couple of other lads forgot to slow down on the incline out of Skipton on the Grassington Road, Ian and Simon were considerate enough to hang back and nurse me to Cracoe where we turned left through Hetton and Winterburn to make it to Airton just before the egg curfew time of 1100 hrs.
We had a very civilized, leisurely breakfast (delighted to be joined by Nigel who, despite insisting that he has fallen out of love with cycling had ridden a longer hillier route than us to get there) and were just about to leave when the 'A' Team arrived pumped up with adrenalin after attacking the limestone escarpments to the west of Arncliffe, I had no desire to sit and watch them fight over scraps of raw meat so after a quick photo to confirm to myself that I had made it from crutches to Airton in half the expected time Ian, Simon, Nigel and I left, hoping to get up Ingrow before the wolves got scent of our trail.
The coffee and walnut cake appeared to have increased Ian's hematocrit to almost Lance Armstrong levels as he chased down the VC Bradford/Pennine team on the Keighley Road, the rest of us taking advantage of his slipstream. If the elastic broke for me at Hermit Hole bends - it exploded for Simon, who recovering from a virus and chronically short of miles in the legs over the last few months, died a thousand deaths. I loitered at Flappit  top for quite some time but eventually had to leave. Sean caught me at Mountain and informed me he had passed Simon on the moor before Manywells and sounded surprised that he hadn't jumped on his wheel - LEL training starts tomorrow.
Same times next Sunday - 9am Denholmgate, 9.30 Keighley.