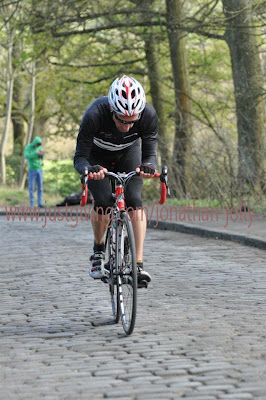 A glorious if chilly morning for a very challenging ride. I hear that some members headed for Slaidburn instead of venturing to parts unknown. Peter was always up for the cobbles and the' Vicar' even put in an appearance as well as Neil.
Mick Collins' excellent route took in many roads I knew, some I didn't, and a few I don't want to know !
The long drag from Cooper Bridge to Outlane was taken by the group of 20 or so at a speed the wrong side of ''comfortable' and when we hit the first cobbled 'burg' at Stainland Dean the more youthful legs were dancing away from me. We re-grouped with about a dozen of us for a steady ride up to Buckstones but Sean joined us at Pole Moor and a new urgency seemed to join with him as we charged down through Slaithwaite and up the cobbles to Salendine Nook. 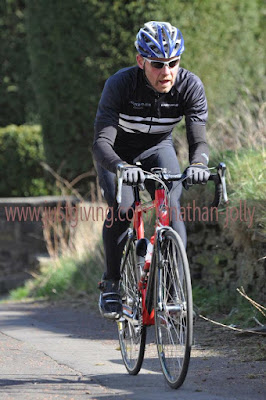 From Brighouse I was on more familiar, but no less painful roads. By the Hough the zip had left most legs and 'Shibden Wall' was no fun at all. More welcome was Mick and the team at the top with drinks and bananas.
After the feed a few riders headed home, and after Gibb Lane up to Mount Tabor a few more wished they had joined them. Down to Luddenden and then the realisation that I hadn't really examined the route as the route signs sent us up the almost impossible Old Lane (the provision of a hand rail says it all). At least the organising 'tifosi' were at the top shouting encouragement.
You know it's a tough day when the Jowler seems like a breather. Brother Nige appeared to offer encouragement, or was it pity ? We were now down to six riders over the Haworth Old Road and Cockhill to pick up a welcome tailwind down the Calder Valley. Up the cobbles again at Woodhouse Lane and another surprise as we were directed up Wakefield Gate. After Exley bank only (!!) Trooper Lane left to conquer and with some vocal encouragement from Mick and the team we were there - Paul Ward taking the honours with Eric close behind. 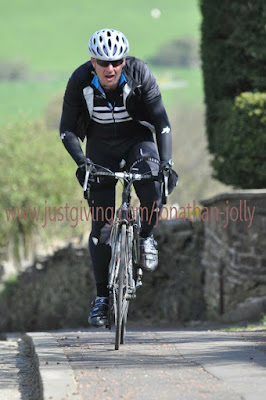 A very satisfying day out. Thanks go to Mick and his helpers for a well organised day, a pity more riders didn't turn up for our own 'classic'.
PeteH says - An epic route, 'the hardest day I've ever had on a bike' was how Neil described the route and I'm not going to argue. Fortunately Mick and his team looked after us very well and are already planning next years 'Ronde'.
We were expecting a larger flock of Condors - perhaps I shouldn't have blogged the route! As Mel says above it was the wrong side of comfortable going up the drag to Fixby. I was riding with Simon and told him that I was going to have to let moto 1 go or there was no way I would make it round the full course. Fortunately Simon's legs were also hurting (he'd been racing at Darley Moor the previous day) so he dropped off to keep me company as our man for the classics, Mel, and Neil disappeared up the road. Brendon from 3RT and a lad from Tod who in the 80's used to ride for the Imps joined us as we set a more civilised pace.
Dropping down to Stainland Dean we could see that Moto 1 had disintegrated up the first cobbled climb of the day. Our quartet rode out of the top together and as we approached Ringstone Edge I heard a familiar voice sat in behind us, it was Neil who had been blown out of the leading group and missed a turning and was now happy to have found a less urgent grupetto to ride with. 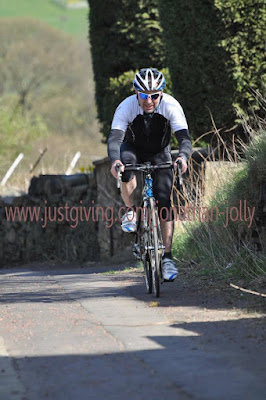 We were having a smashing ride round the quiet lanes of the Colne Valley, that was until we were caught by VS's Chris Thompson who'd also been off course, Chris's presence had us having to work hard again. Our group split, Neil and I begged him to leave us alone but he stayed with us until the first feed station at Ploughcroft where he left with another victim, Ivan Boyes of HSW (nether finished - probably still riding round the upper Calder Valley looking for RVC direction signs).
Shibden Wall had been the defining moment for several RVC riders including Simon and Neil. We made our way towards Gibb Lane but Simon decided to call it a day and Neil was feeling the pull of his nearby home, having ridden out to the start he had no need to go to the finish to pick up his car. He told me he had blown; I pottered on alone, at the top of Gibb Lane I looked back but no one was in sight so I continued to push the pedals round with only myself for company. Luddenden's Old Lane, Jowler, Cock Hill, Woodhouse Lane, Wakefield Gate and Exley Bank came and went. Just Trooper Lane left, I'd managed to get so for without putting a foot down on any of the climbs and with weary determination managed to make it a full house.
Once at Southowram a load was lifted and I felt really good for the ride back to Liversedge.
I hadn't been back long when to my surprise Neil walked in, he'd ridden through his bad patch spurred on by fear of having to tell the Wednesday club he had packed.
I'm not sure what happened to Richard, I was told he retired at Brighouse but the photo above is on Shibden Wall so I look forward to hearing his account.
Thanks to Jonathon Jolly for the photos. A donation will be made when I work what to do. 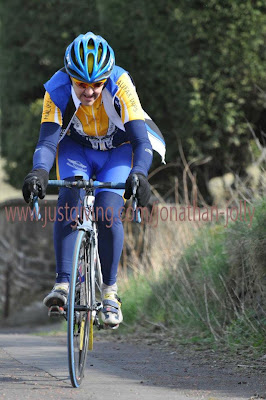