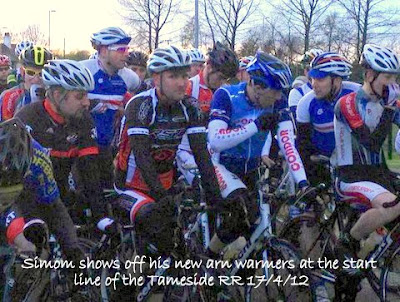 A few familiar faces on the above photo at start line with Simon yesterday evening, Pinkie & Mick Collins to his right. The race was won by Halifax's Jack Clarkson who now rides for the Hope Factory Team. Whilst Simon hasn't yet repeated his win from several weeks ago he's happy with his progress - he's a busy life, racing again on Saturday at Blackpool then helping with the marshaling at the Imps LVRC race on Sunday. Simon's sons Adam and Nathan, riding for Kirklees Cycling Acadamy are picking up 1st's and high placings every week in the schoolboys category's - Nathan being ranked 7th Nationally in his age group.
I havn't seen Pete Smith's name in the results for a few weeks but I see Brian has been trying out his new time trial bike with a 1st on standard in a 25 in the North East a few weeks ago and a 27mph+ 10 miler on a Hull course last week. Brian and Grimpy travelled down to Staffordshire last Sunday to ride the first round of the LVRC Percy Stallard National Road Race Series, Brian taking 3rd in his age group in a bunch sprint with Grimpy finishing in the same group but insisting he was just making the numbers up as he recovers from a dose of man flu.

Thanks to Robin for the Spring into the Dales report - I can't believe he wrote it - I could understand it! - it has been suggested someone must have hacked in to his blogger account. The Condor had another good turn out in the event (the lure of the rice pudding?) with Paul Gower, Paul Priestley, Richard Burnham, Pete Whiteley, John Lumb, Chris Sylge and Adrian Lord being seen enjoying the sunshine and views as well as those mentioned in Robins report.
Posted by petehorne at Wednesday, April 18, 2012