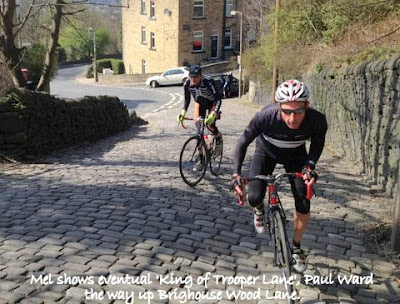 Denholmgate 8.30 for anyone not on Easter duties - I'm hoping to have a steady ride to Feizor, perhaps via Malham and Stainforth.

PeteH says: Myself, Steve Cavell, Damian & Pete W set off from Denholmegate. Steve turned at Skipton, Pete & Damian then commenced a private half wheeling competition on the road to Gargrave - I say it must have been their own private competition because they left me. Unfortunately Pete must have been going so fast that he missed the turning for Malham. To my surprise Damian was sat waiting for me so we pottered up to Malham expecting Pete realise his error and catch us up. Alas this was not to be - the parachute must have failed to open and we didn't see him again. This appeared to have a calming effect on Damian who in the main rode sensibly except for brief episodes where, for no apparent reason, and without warning, he put the hammer down. Knowing Damian quite well I just ignored his antics, eventually he disclosed that he's found a website called Strava where he uploads his Garmin details and compares times on certain sections of roads (usually climbs) with other like minded cyclists - nothing like a relaxing ride in the Dales to de-stress.
From Malham we went up the east side of the Cove then on to Darnbrook and Arncliffe stopping at Cracoe for bacon and sausage sandwiches (crispy bacon and 4 sausages - very good). Just over 80 miles and home in time to watch a magnificent Paris-Roubaix.