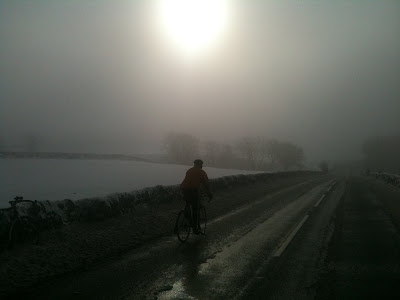 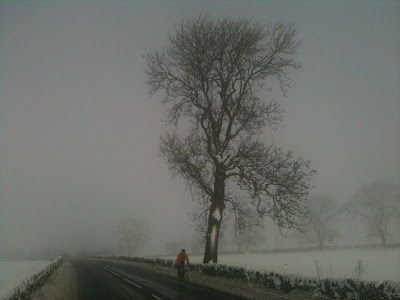 Well Pete there were some more of us out on Sunday, we waited at 9.30 at Keighley and nowt were seen of other Condor colours, so Steve and I went our lonely way whilst others stayed in bed, or, as in your case, spent their time taking pictures at the start of the ride rather than actually getting on their bikes in good time. We ended up at Cracoe in the end, after much meandering o'er back roads shrouded in mist. Your pictures look a little brighter than I remember it ... perhaps you have one of those filters on your camera where everything is pumped up to number 11? Or perhaps my phone camera has a melancholic filter, as befits current times, or it was simply compensating the light balance when confronted by the somewhat violent hue of orange being sported by Steve's latest piece of clothing, which somewhat surprisingly has lasted him more than a couple of months without being ripped or doused in Stihl Saw oil. I lost the competition for who can last the longest without complaining of cold hands, weak southerner that I am.
Posted by robin at Friday, February 10, 2012