There will be a tale to tell from each rider of this fine day out. My version has some highs and some lows, through the dark satanic hills of post-industrial Lancashire, some "gentle breezes" and a "light shower" just for good measure.

Leaving home I thought twice about my jacket. The glowing dawn sky promised a bright day ahead. But it was lying. I'd seen the forecast and threw a cape in the car. Chatter at the start still debated the merits of pocketing vs donning rainwear as the first drops started to fall. By 8am it was mildly damp. By Todmorden it was torrential. By Blacko the bucket-sized raindrops were bouncing back up to handlebar height. I decided that a jacket was probably a good idea after all.

Through all this, Pete Horne, who had grabbed the head of the peleton leaving Rochdale,  held grimly to that position for mile after mile until Gisburn, thankfully keeping VS Chris and others off the front and holding the pace to a manageable level. That all changed when "The Condor" forced his way forward after finally losing patience with a fluorescent pannier frame. He spread his wings to rid the flock of this irritant, and swiftly dumped Neil out the back on a series of little rises.

Now I was wavering between "uncomfortable" and "into the red" at this point, using well-rehearsed survival tricks to slip a few lengths back on each of the ups and regaining contact on the downs. The thing is, Neil is one of my riding heros, and he's been going very well recently, including nursing me home at the end of a recent club run. So if he is in trouble, I'm probably pushing too hard, considering the length of the ride, and it would be prudent to ease off & save something for later. Plus, if I slip back too, then maybe the message will go forward that the pace is just that smidgeon too hard.

It didn't work. There was just me, Neil, and some wolves. It was a long, exposed 5 miles to Settle. I got my head down and dragged the Imp along. Maybe it was penance for the things I'd said earlier about his racing cape looking like a diaphanous negligee (see photo for details - I think an "empire waist" will be making a comeback soon for many professional cyclists, it seems so ordinary now to have the elastic around the hem of your jacket rather than round your lower chest).

At Settle we wrung water out of gloves and, letting the faster lads bugger off, formed 'Moto 2' to tackle Buck Haw Brow at a steady pace. Robin emerged from the pack, now minus his purple hooded anorak (yet another eccentric sartorial statement), to start our group over the next 20 miles to Kirby Lonsdale. We cheerily waved to the fast lads as we swept past them - they had stopped at the side of the road to admire Sean's broken chain and chat to the friendly locals in a white van who seemed to have a problem with dozens of cyclists being on the A65. Which gets us to the butty van for a welcome hot cup of tea - in the sunshine - while it was now Brian's turn to get busy with a chain tool. 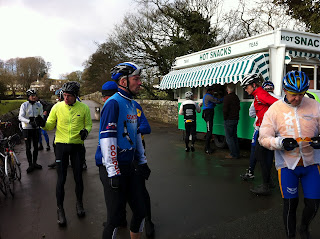 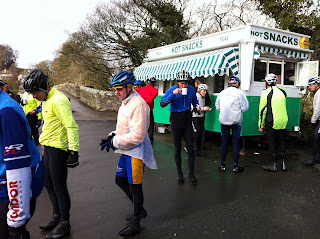 [Sorry - these are the most boring photos ever on our blog. And the lads don't look happy do they?]

The scenery gets a little better in the Lune valley, even if we were now into the teeth of the wind. Sensibly hidden about 4 or 5 wheels from the front I was surprised when the VS crew suddenly, at a pre-arranged signal of "broken spoke", pulled off the road and left me unexpectedly exposed. There was no avoiding it and a pull had to be done, but thankfully not for long. It took a long time to remove a layer at the first set of lights we came to, they turned green, and now I was returned safely to the back of the pack.

Which was a mistake. Apparently a criterium had been organised through Lancaster town centre and being on the back gave the full concertina effect of sharp braking and hard accelerations, followed by a 25mph charge out of town on the A6. I'm not sure what we were racing for, but we were going to be there first.

And so to Scorton. The Priory has changed hands and taken against cyclists, so most carried straight on, hoping to catch up with Pete, single Simon and big Phil who had pottered on earlier. They were never to catch them though, because they were in the Barn cafe opposite - with Pete wresting with a super-size portion of soup and a gigantic fruit scone (eyes - belly - slightly hungry?).  At Robin's insistence we loitered for a pot of tea, just to be sociable. I think he's now strongly in favour of multiple cafe stops on each ride.

Which just left Longridge, Blackburn (where I suffered ten minutes of power failure, legs didn't want to turn at all, thankfully solved with a museli bar & a gel - I'm grateful that my companions waited here), Haslingden Moor and Owd Betts. I felt strong on the finish and we were led back without trouble, even if we did have to force Pete to the side of the road in order to let Simon get back on after some lights. The setting sun put out a red glow to highlight Rochdale's many scenic charms, while a black cloud lowered and then threw hail at us in the last 5 minutes to the finish. But we didn't care because we were back, in the pub, 130 miles, and its only February.

Thanks go to Neal Healey & West Pennine for organising and to the Spring Inn for a fine tea at the finish.

ps Nigel sends his regards. He'd love to come out with us but his bikes all now have a SORN (statutory off-road notice) and he needs to contact DVLA (defunct velocipede licencing agency) ...
Posted by Ian Robinson at Tuesday, February 21, 2012