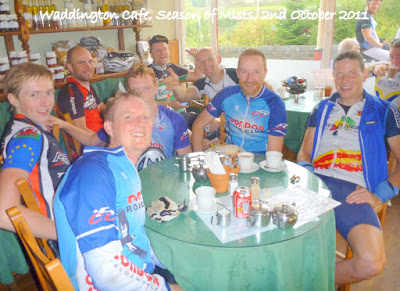 Good to see a few new wearers of the Condor kit. Adrian looked as if he's recovered from the previous weeks 3 Peaks, trying to hide behind Adrian in the above photo is another member from the Boylan dynasty, Bernard's son Tom who together with his mates had an excellent ride - I just hope he hasn't inherited his dad's puncture repairing ability.
I can't give much of a report of the days performances, I was riding alone for most of the route having chosen to start a few minutes after the a peloton of 130 or so riders I took the initial climb through Heptonstall at a relaxed pace hoping that Pete Smith, only very recently back on the bike again after his accident, would catch me after arriving late at registration. I'd only just passed the Fox & Goose when I saw Richard freewheeling back to Hebden Bridge shouting something obscene about his new £170 cycling shoes (what happened to a 3 Peaks report Richard?). Through Colden and Blackshaw Head I had settled to an easy pace chatting to Todmorden Harrier and frequent Audaxer Richard Leonard and then Dave Saleem was telling me about the previous weeks Autumn Tour (Neil - how about a blog report and photo's).
Dom Turner, who had had the 1st of his 3 punctures on the start line caught me at Blackshaw Head, I contemplated tagging along with him until he told me in an urgent voice that he was intending to catch Moto 1, doubting that Moto 1 - Mel, Robin, Andy Marshall & John D etc. would be riding at a gentle pace so he could catch up I decided to let him get on with it. I pottered along, steadily catching individuals and small groups through Briarfield and Fence. On the ridge towards Sabden I came across Martin and Dougie who had been sorting out a puncture so we teamed up and made our way to Waddington together. I was surprised to find that so many Condors and associates such as Tommo from VS, Mick Collins & Steve Robinson had stopped for a sit down feed so early, I know its the Social Season but bacon Butties after only 30 miles or so is a bit extreme.
Not wanting to spoil a reputation thats taken several years to build I explained that I was going to ride on steadily and would expect them to catch me up the road. Martin & Dougie came with me and behaved impeccably, not once pushing the pace beyond my comfort zone (perhaps they didn't know the route). We stopped for 10 min or so at Downham then at the start of the climb out of Downham over to Roughlee the dreaded hiss was heard, it was coming from Dougie's rear wheel; I continued alone. I then caught a guy from Goole resplendent in a 2011 PBP jersey, he insisted that he has enjoyed his French odyssey then went on to tell me about his neck muscles packing up during the ride and having to tie his head back so he could look forwards whilst cycling - enjoyment comes in stange guises.
We rode together through Barrowford and Nelson up to Coldwell Tea Rooms where I spent some time chatting to the marshalls, Andy Mann and fiancee. I had an enjoyable potter back from Coldwell to the finish with Martin and Sally Cowton who had been up at Coldwell sampling the coffee and was very surprised to be caught on the final descent by John D and his VS team who had been in the Coldwell cafe for some time administering sweet tea to recent young recruit to the squad.
I'd been eating rice pudding for some time before Ian, Pete Smith, Dom, Thommo and others arrived, I had expected them to catch up during the ride but it soon became clear why this hadn't happened - they'd managed to get lost - I won't say anything more.

Thanks once again to Chris Crossland and his wonderful team, a credit to the CTC; but Chris, next year can we have marshalls at all junctions in Nelson - just till Ian's passed by.
[Ian adds: I've now realised that passing through Nelson with my eyes closed may have seemed like the best idea in previous years when I could simply follow a wheel, but not so good this time when others were relying on me to know the route. I know where I went wrong - at the dreaded "dead end" roundabout. Apparently Nelson once had a large Tourist Board, but then they used it to block up a broken window ...]
I understand that Robin is to blog a Moto 1 report.