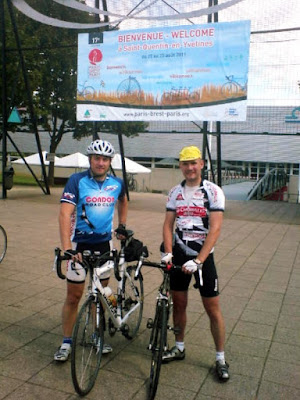 Michael Collins and I went to the starting line (last minute as usual) for 16.00 on Sunday 21st August 2011 at Saint-Quentin-en-Yvelines, Paris to be met by 500 other riders in the vedettes group (80 hour time limit). Baking hot in 38-degree sunny weather we waited to be called forward to the first on many timing mats and the first stamp in our Brevet cards. We got away in the second wave just 20 minutes after the first group and didn’t the excitement of the event trigger an immense pace doing 40kph on the flats to keep in a group – you would have been excused to misjudge the event for a 100 mile sportive not 1230km Audax. I then settled into a well paced group and managed to ride to the first control without hitting any of the traffic furniture described as serious hazards by the organizers averaging just over 27km per hour.
As darkness fell, I found myself riding in a small group with chaps from the other Condor (Rapha) and despite the immaculately expensive kit was riding at a sensibly conservative rhythm. As the kilometers passed we picked up more and more riders and rode through the first night comfortably. The next 300km were pretty uneventful just trying to click off the controls through Fourgres, Tintiniac before crossing over a bridge for me to recognize the town of Loudeac (Mark Cavendish won here a month earlier on apparently a flattish finish in the Tour). I managed to skip ahead of Mr. Collins as he was treating himself to a restaurant dinner whilst I had a splash and dash of cake and a can of coke.
I arrived at Carhaix (@ 525km’s) hoping for the Baxter’s support coach to be waiting and only to be told by Bob Johnson that they were still travelling from Paris – being unable to change my clothes would proof to be painful later in the ride. Whilst looking for the coach Mick had got back with me and we would ride to Brest together. Knowing I was going to have a sleep in Brest at a booked hotel, I decided to press on at the front of our group and shedded two guys (1 from Oxford and 1 from Cambridge). As we dropped over “the Rock” into Brest, a certain Mr. Collins likened the pace of the decent and lines undertaken to those not seen since his pro days in France a few years ago. Tremendous fun and would love to do that again sometime!
In Brest (618 km’s) I left Mick to continue on without sleep and relaxed in my hotel for a well deserved 6-hour sleep. Rejuvenated and ready to go, I left the hotel at 2.30 in the morning feeling great and I was halfway already. The next 300km’s was quite a strange experience as I was riding through the later waves of riders who’d caught me whilst I’d been sleeping. I was riding through these riders at about 5km per hour faster and rode on my own through the next day (Tuesday). As I left Fourgres, I caught up with the minis PBP held for youngest under 16 who were riding a decent distance of 200km. 2 Spaniards decided to take-over this group and I hooked up to their back wheels. We did the next 60km’s bit and bit flat out until we overtook a Dutch chap who decided he could go even faster with our small group and we all sat on his wheel. I had to ask myself if we were riding 800 miles or just 80? It was all fun though whilst my legs were feeling good. I arrived into VILLAINES-LA-JUHEL to a rapturous applause from the cheering crowds and we were all treated like cycling stars – what a sensational party atmosphere!
As we hit the night I was starting to tire and was relieved to get to MORTAGNE-AU-PERCHE and fell asleep at a table for 10 mins or so after eating my supper. I left into the darkness thinking just 140km’s to go but sitting down was starting to take its toll. Riding out of the saddle was to become more and more frequent despite me catching a group from Switzerland. I was alittle shocked when we’d ridden through a small town for one rider at the front to put his arm in the air followed by everyone except me peel off for a call of nature! I hadn’t realized we were still at school.
On leaving the last control point in Dreux at 4.30 in the morning, I was feeling great just a couple of hours to complete the ride, at which I point I hit a cateye and punctured - the Swiss group left me in the middle of nowhere. With limited light I walked to a nearby village and wasted the best part of an hour in doing so – perhaps my mind wasn’t just in the right place at this time and being alone was best! After riding about 10km’s gently, I was caught by 2 Irish guys and a chap from Loughborough who I would ride with to the finish. I arrived back in Saint-Quentin-en-Yvelines, Paris to just a handful of spectators and the ride was done!
In a nutshell; 3 years of endurance audax preparation, 6 hours and 10 minutes sleep in 3 days, 63 hours total ride time and a sore backside, hands and feet. Would I do it again – probably yes but maybe single speed next time. The one thing us Brit’s can take from this experience was the enthusiasm and respect given to all riders by the French spectators. I don’t think I went through a village without clapping and cheering and it didn’t seem to make any difference what time of day it was 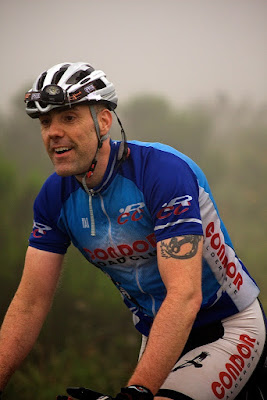 Danial looks relaxed as he is well into the kilometres, PBP 2011

Posted by petehorne at Thursday, September 29, 2011