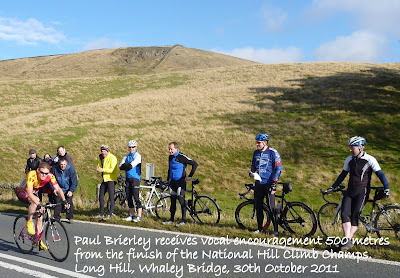 Richard may think that I'm a man of leisure but it didn't feel like that when I got home yesterday - only 85miles for the day's ride but I was kn****red - I know we've always referred to the Peak District as 'Punishment Park' but why were the hills twice as hard on the return journey? Once the 8 of us had got through the mist on Holme Moss we were treated to a bright sunshine and clear views for the rest of the day, the western Peak and Goyt Valley looking magnificent. As planned we had a re-fuelling stop at Glossop then took back roads over to Whaley Bridge before pottering up the 4½ mile hill climb course to cheer on the 150 competitors, ages ranging from 12 to 72. Tea and cakes were taken at race HQ prior to re-tracing our route home - all that is except for Mick Collins who was dragged into an ale house by Pinkie and Dan Italia (who'd driven there) and not seen again despite phone calls and texts being made in the hope on leading him back onto the not so straight and narrow road.