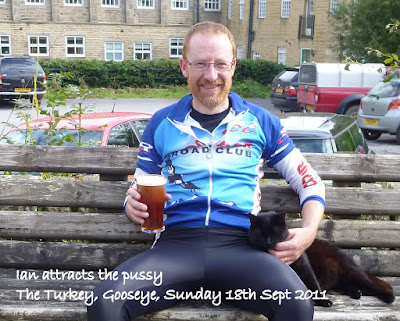 It was a bit of a relief when the start of the Social Season only attracted three riders, Ian, Brian and myself. We had a very sociable outing making our way to Burnsall Cafe via Silsden and the back roads through Kildwick and Bradley and over Eastby Brow to get to Burnsall by 10.30. The cafe was already filling up with cyclists (including 1989 World Professional Pursuit Champion Colin Sturgess). After a leisurely break we returned via Appletreewick (surprised to see camping field full to capacity), Barden and Cavendish and then taking the gated road and up through Draughton, sticking to the unclassified roads down to Silsden.
We said goodbye to Brian at Steeton, Ian and I climbing over Steeton Moor and dropping down to Gooseye, an effort which required a refuelling stop at The Turkey (Cragg Vale bitter - highly recommended). Fortified we made our way to Oxenhope via Oakworth and Haworth Bottom. At Oxenhope, after being shouted at by a Sunday driver (sorry Nigel) we were lured into the Bay Horse by the thought of the Old Spot bitter, unfortunately we had to make do with Black Sheep and a chat with some of the mountain bikers who were finishing the Hospice MTB Challenge - not a great day for mountain biking by the look of many of the finishers.
The beer must have gone to my head because instead of heading straight home over the Dog & Gun climb I went with Ian over Fly Flat and was near death by the time I got home at 3pm.

Unfortunately the local Cyclo-Cross results are not being made available on the net so I havn't been able to track the results of our 3 Peaks aspirants, Richard and recent recruit (or re-recruit after 1st being in the Condor 20 years or so since), Adrian Lord. Good luck to you both next Sunday and remember, its the taking part that counts.