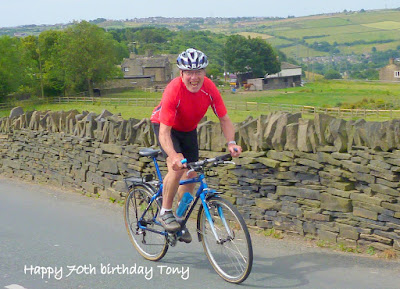 As you can see from the above photo Tony Parrish is still effortlessly sprinting up hills at 70 - Congratulations Tony. 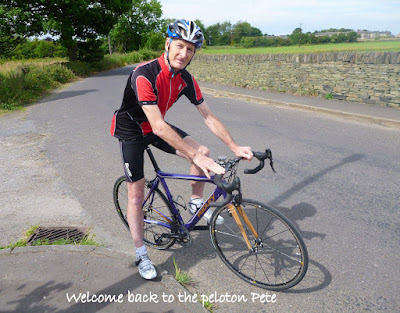 Its also good to see Pete Gravenor clipped into the pedals again after recent surgery.

Brian is still setting the example for the rest of us to follow on the racing scene taking silver in the Veterans National 50 Mile Time Trial Champs in Cheshire last Saturday to follow up on his category win in the Clifton CC Road Race the previous Sunday (how did you go on Mel? - I was expecting a full report on the blog). Grimpy travelled down to Essex the same day to defend his lead in the season long Percy Stallard Veterans Road Race Series, he took 2nd place behind Richard Booth to retain his lead but its looking tight at the top.

Whilst on the subject of Grimpy, many of you will know that last Sunday he began the last week of the T de F, riding the last six stages of the Tour 2 days in front of the actual Tour - todays 'Queen Stage' which finished at the top of the Galibier, Grimpy was due to ride on Tuesday - as you will have seen on TV it was snowing on the Galibier on Tuesday and 'cyclists were being rescued from the mountain', I look forward to hearing how John fared.

This coming Sunday its the Brimham Rocks 200k Audax starting 8am from the village hall at Fairburn, just north of Castleford, its a flat start, lumpy in the middle with a flat fast finish, we have 3 or 4 Condors pre-entered and 1 or two entering on the day - not a bad weather forecast and good training for the following weeks Other Fleet Moss 200.