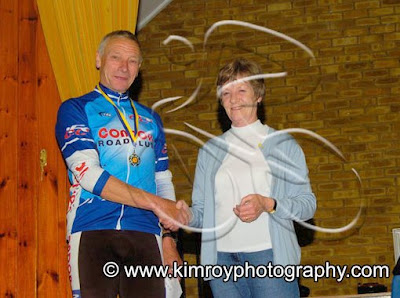 Brian is pictured here receiving his medal for third place in the VTTA National 30 mile Time Trial Championships after travelling down to the Home Counties a couple of weeks ago.
He went a couple of places higher last Sunday when he won his category in the Bashall Eaves Road Race. This was a counter in the LVRC Percy Stallard National Series, Grimpy took 3rd which promoted him to overall category leader after three races in the series; a great honour and huge motivation for the rest of the races. I have spoken briefly to Pete Smith who was also riding, he tells me that it was a pig of a day, cold & wet with strong winds to add to the fun. He cramped up as the sprint approached, hoping to relieve the cramp he cotinued for a 15 min warm down after the line during which time he got so cold he had to be helped off his bike. Mel was on the start line for the over 50's but doesn't appear in the top 6 results so I look forward to hearing about his race. Sean Smith took a good win for the Imps in the 45's age group.

Whilst Richard and Steve Cavell were missing from the latest round of the Yorkshire Cyclo-Cross Summer Series Ian Wellock made a rare appearence at the Colne Valley High School race (speed training for the 3 Peaks?). He finished just over a minute behind Grimpy (1st V60) which will have given him a target for the next round at Kippax on the 15th June.

On the Audax front Danial Webb booked his ticket for this years Paris-Brest-Paris 1200k event by completing a 600k ride last weekend. Whilst on the subject I'll remind you all that Chris Crossland's, 'Good Companions' 200k Audax takes place on Sunday 19th June, be ready to start at 8am from Mytholmroyd Community Centre. The below pic. shows Ian & Nigel leaving me for dead on Blackstone Edge in the 2007 event after I'd dragged them round for 190k (at least thats how I remember it). 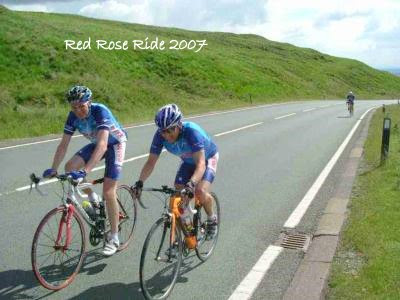 If anyone fancies coming along I'm meeting Mick Collins and one or two others outside the Ritz in Brighouse at 9am tomorrow (12th) for a hopefully steady 70 or 80 miles with cafe stop.