The much travelled Brian went down to East Anglia last Saturday to compete in the Veterans National 25 mile Time Trial Championship. He turned out a magnificent time of 55min 22secs (which is 25min 55 secs faster than his age standard) which gave him 7th place overall out of the 130 finishers.

Also making a (not quite so) long journey was John who travelled to Audlam, Cheshire to ride the LVRC National Road Race Championships finishing 10th in his age group, the winner being Richard Booth.

Pete Smith continued his climb up the podium on Sunday at the Doncaster Wheelers Road Race at Harworth. He clipped off the front after only 4 miles of the 45 mile race being joined by John Elliot of Alford Wheelers and the vastly experienced Mike Allan riding for Pro Cycle Hire, Majorca. Pete and Mike Allan worked well together to make the move successful but Allan jumped away with one mile to go leaving our man to win the sprint for 2nd place. Pete's had several 3rd places this year so he was happy to go one place higher in this his comeback season. I'm not going to put pressure on him by saying that it surely won't be long before he steps up to the top of the podium.

To continue Richards report of last Sundays club run; after he left us at Otley we went on the back road through Askwith to Ilkley where we ended up with the likes of Team Sky Pro, Jeremy Hunt and the Barass's, et al on our wheels. In order to shake them off, instead of going past the golf club towards Beamsley we cunningly went straight ahead at the junction, to Middleton Moor and Langbar. This not only got rid of the Pro's but tested Simon's legs almost to breaking point - Simon, the Condor's most recent signing and better known as single Simon was, as you may have guessed, riding single freewheel, this didn't stop him and Mick dropping me. However I did have a trump card - they didn't know where they were going. Once we got together again and they were nattering that it was time for a full english so we took the more direct route from Langbar to Buffers Cafe at Storiths (see photo). 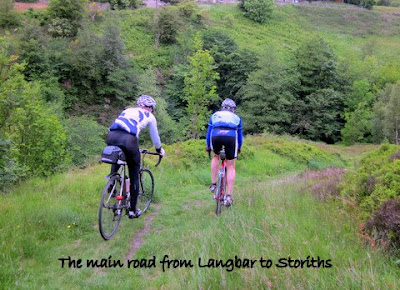 We left Buffers just as the first drops of rain began to fall; down through the ford and past Cavendish, on to Halton East and Draughton, through Silsden to Steeton as the rain got gradually harder and the temperature fell. 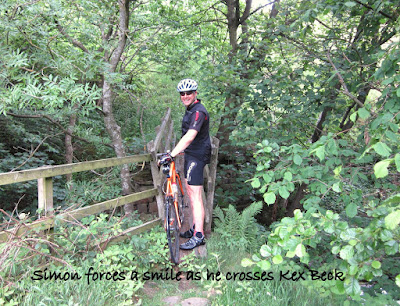 In an effort to avoid Ingrow we then went up to Steeton Moor and Keighley Tarn (I was sure this route would have Simon faultering - but no - they just rode away from me again). Turned right at the Tarn and left to Laycock and Goose Eye, on Holme House Lane (just to find out if cobbles are slippery when wet) and through Oakworth to Ebor Lane and Haworth Bottom. 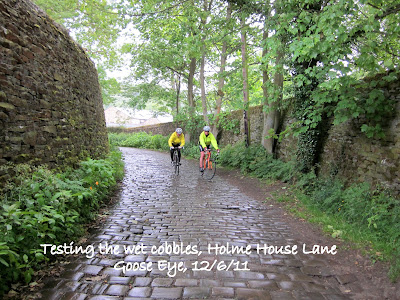 From Howorth Bottom we went on Victoria Road and the double chevronned Brow Road - bingo - Simon faultered and had to walk the last few metres to Oxenhope Road. He didn't faulter for long though and rode up the Dog & Gun climb with ease. I must admit it was getting pretty grim by this time, the rain got harder and the temperature, a balmy 17 in the morning was now down to 8 - I was glad to get home, put my feet up, nurse a can of Guiness and watch Bradley win the Dauphine.