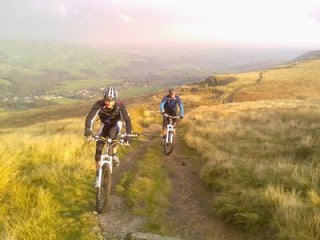 Last weekend was another trip out on the mtbs - this time around Stoodley Pike and out into the badlands of Lancashire. This was mostly a new route for me, which seemed to be mostly uphill and mostly into a light headwind. If there were any downhill section then they passed in a blur of rocks and dropoffs. some sections were fantastic, and the views were splendid any time I lifted my head away from the front wheel.
The lads seemed intent on giving me a hard time and succeeded throughout. Steve seems to be recovering his legs after a few weeks away from the bike. I think the only time we stayed together was on the canal towpath back from Littleborough to the climb up London Road - and that was only because I wouldn't let either of them past.
The bacon & egg report rated only a fairly poor 4 out of 10 at the cafe in Hollingworth Lake - the egg was alright I suppose but the bacon was below par and the service never made it at all. Not a patch on the Towngate Tearooms run by Mrs Barker in Heptonstall which gets an 11 every time (but then I might be biased).
There have been mumblings about having a night ride one Wednesday - but I'll let Robin organise that if it is going to happen. There have even been mutinous remarks about *not* going to the Caty afterwards and going to the Robin Hood in Pecket Well or the Hare & Hounds at Lane Ends. Well, go on then if there is beer ...
ian