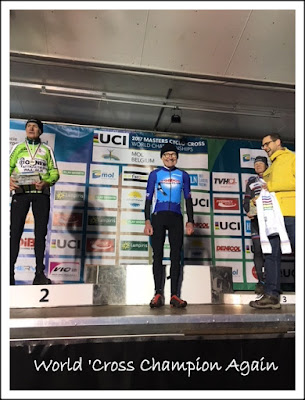 News is filtering through from Belgium that our very own Grimpy (aka John Ginley) has today retained his UCI World Masters Cyclo Cross title on the demanding purpose built course at Mol.
Congratulation from all your team mates John, perhaps now you can give us an easier ride next Wednesday. 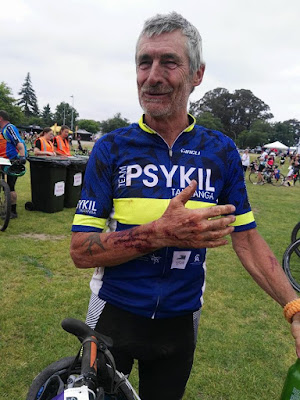 Whilst John has been conquering all before him, our Southern Hemisphere team has been riding high in the antipides. Here's Pauls report of his recent MTB win.

Firstly congratulations to all the Pyskil Team for outstanding performances and the many PB's that are just reward for all the training and commitment in the build up.

Being from the "Dark Side" I fancied the Huka this year and entered with the normal intention of having a few training/recce' rides to get a feel for the course. Unfortunately I only managed a very limited couple of rides when assisting NZ Fire Service run their National Champs there last month, however I did ensure I climbed the "Grinder" that would be included twice in the race to assess one of the biggest climbs.

On Friday for a leg loosener and a bit more familiarisation I took Lynda for a spin out on the first 30kms of the course along the very scenic river past Huka Falls and on to the Aratiatia Dam and back. Whilst helping her with one of the little climbs she fell off and the air was blue!! I let her calm down and eventually really enjoy the ride

I entered Group 2 with the predicted time of 5 hours that seemed about right having checked last years performances. Whilst lining up I noticed in Group 1 a NZ Fire Sevice rider who had come second in the Champs and had won the over 60's Huka category last year  (just over 5hrs) and who was only slightly younger than me! I purposely kept quite and hoped to see him later in the race?

We started and the pace was reasonable with two riders one in NZ Army kit and the other an under 18 from Kerikeri who were clearly working hard passing other enthusiastic Group 2 riders, I latched onto them and by the time we passed the Bungy Jump off Spa Rd we were leading the Group. We started to reel in Group 1 riders and after approx 6kms I saw the Fire Service rider heading a group of 5 riders, we quickly (and quietly) passed .them at a good pace that we maintained until we entered the woods (approx 25kms) leading somewhere into the Craters Park.

The trails were riding well and again we caught and passed several riders until we latched onto a very good group led by 2 Ladies who were controlling the pace and riding beautifully and were especially talented on the interesting twisting terrain and descents!

We finally reached the first ascent of the Grinder and rode it very steadily and I resisted the urge to push on, over the top we held out our arms for an Hawian style bangle to be placed over and kept proving we had climbed it during the second ascent. The descent was very fast and part way down I shipped my chain causing me to stop and quickly sort out before chasing back on. Once out into the open the terrain changed to barron, dry, loose and twisty stuff that if you forced too hard would have you sliding over the edge! I was right on the Girls wheels with 4 guys on mine when without warning the ground gave way causing my front wheel to slide out throwing me and the bike tumbling down the embankment that was covered in sharp brambles. The guys asked if I were okay and I told them to crack on, with difficulty I untangled myself and the bike and scrambled back up to the track checked the bike, my arm was bleeding from a few deep scratches I removed some obvious prickles, checked that my half eaten banana and gels were ok and set off!

Plenty of adrenaline flowing now and after a couple of kms I latched back onto the Group and settled down for a few kms. I suddenly felt something was missing and reached for my pump, it was missing and had come out in the the tumble. This was worrying but no way of changing things so fingers crossed and a bit more stress! I recognised we were approaching the Grinder again and this time I couldn't wait  and pushed on hard quickly getting clear and catching another rider who I rode with almost to the end.

I ate the remainder of the banana a second gel, had a drink from my bottle that was getting down and might run out. I had passed two stations and knew there was another somewhere and would/should take on fluid there.

There was about 20kms to go I felt good when we came out into the open and the last drinks station I stopped and downed 3 cups of electrolyte and the helpers commented on the blood and I smiled and said I was getting too old for this .

I recognised the tracks near to the Craters car park that twisted you around the Ferret and Tourist trap. I was on my own at this stage and the Ferret seemed to go for ever making me think was I doing it twice when without warning I hit something hard that stopped me dead and threw me off, my right leg (hammy) cramped badly and I feared I might have punctured my front wheel! Thankfully no damage just a fright and reconcentration!

We caught several of the short course riders including one very talented young man who I followed through tight single track for a couple of kms before passing and congratulating him, one for the future.

We were approaching the woods before the lookout over Taupo and I thought we must be doing another loop as I had about 73kms clocked? I recognised the track and mentioned it to another rider who said no its straight to the finish, I didn't need any more encouragement and accelerated across the field up the incline across the temporary bridge  down across the field up Ferry Rd where we were camped and merged into the finishing straight rubbing shoulders with a startled roadie, keeping the hammer down until I crossed the timing mat "no repeat of last years balls up"!!

I had no idea of time throughout the ride and at times whilst climbing in a group felt to be losing time. I am happy with the 4hrs 35mins thinking it might have been longer. I finished 19th overall (230 riders) winning  my category with plenty in the tank recording 78kms and expecting another few kms, I will know for next time and as always its about preparation. Definitely Group 1 next time.