World Master's Games 2017 - "Mountain Bike and Road Races"
Having moved to New Zealand in 2015 I had accepted that my racing days at Worlds level were over and then last year it was announced that the Master's would be held in Auckland! Should I or shouldn't I enter the mountain biking well it would be rude not to. Further researching the Games it was $300 to enter for the Bronze package and considerably more for Silver and Gold and being a careful Yorkshireman (deep pockets and short arms) Bronze it was.
However there was a silver lining I could enter as many events as desired for the same fee so although not a Road racer I might a well have a go!
My training was going well and I knew I was hitting form at the right time, I had trialled a new Scott 29er mtb having used my old faithful Giant 26er successfully for years. Having overcome several doubts regarding the difference this would offer I had become in tune with the new girl and was very happy with her. (I've had an affair with all the girls as they perform really well and never answer back).
Disaster 6 weeks out and I pull a hamstring on the turbo, this resulted in little training for the next 3-4 weeks (when I wanted to  complete the final ramp up) and finally several visits to the physio for hopefully a miracle. I must give a shout out here to Marcel (Bureta Physio) for acupunture and exercises. Slowly and with the assistance of a tight restriction bandage I could train a bit harder. (Thank you Quintain for the referral). I would definitely get to the start line no matter ......
We travelled to Auckland on Saturday to register and start to feel the atmosphere. Registration was smooth although I thought it a bit tight not including a tee-sheet in the bronze pack? Sunday we moved initally to Woodhill Forest for a recce' ride and then to Helensville Campsite for the night.
Starting my recce' I joined an Aussie rider already numbered up so I knew he was in the category below me I had decided to ride it using the 26er having had the Scott serviced and race ready. The Aussie rode very strong and I think was testing me a little, no worries this was not the time and I had to be careful with the hammy. We had a good brisk ride and I wished him well for the following day. The course was easy to navigate, very fast and flowing and not overly technical Grade 3 in places at best, thankfully it did have sufficient climbing to be able to do some damage!
We set up camp in Helensville and the wait began, started to get a bit nervous but tried not to overthink my strategy after all how many times have I been in this position? 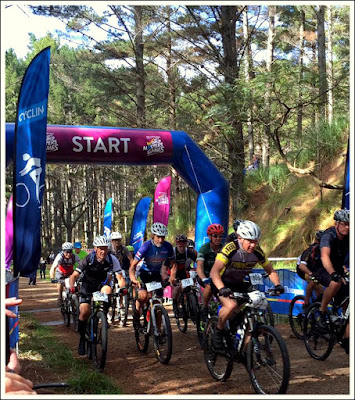 Sunday 30th April Race Day
Warmed up around the carpark and joined the assembly 15 minutes before the start. Whilst we were waiting to be called forward a whole row of linked railings blew over indicating how the conditions were.
We were off and the pace picked up quickly but remained comfortable we got to the rolling hills section and then the climb, it was a genuine test and quickly sorted people out crowning the top we hit the descent Fraser had warned me about. The first touch of brakes resulted in a rear wheel slide and a missed heart beat, I backed off a bit until getting past the corner covered in hay bails. We regrouped along the flat section and this formed a pattern for the next two laps. I anticipated a move on the last climb and ensured I was in the first three over the top six of us had created a good gap and this was the move of the race. We worked well although a couple of riders started to hide I felt strong and considered having a go about 5 kms out but resisted and thought it's going to be a sprint finish.
One of the riders snagged a pedal in his wheel and needed a replacement and sadly his race was done.
About half a km on the approach road to the turn into the finish unbeknown to me a rider had dropped back and launched a big attack on the other side of the road, he established a dangerous lead and had completely outfoxed us, it all became messy and I lost my wheel and subsequently came in 5th, three seconds behind the winner and a couple of minutes ahead of 6th place and others!!
I am disappointed not to medal but thats racing and well done to the others guys. Interestingly the rider who came 4th, one second in front of me was third in the mountain bike race 10 minutes down, umm food for thought?
Thank you to the Organisers and Volunteers who made it possible
The Games were clearly a great success and reminder of past experiences and I am glad I participated. I hope my account encourages you to participate, enjoy and experience the camaraderie and occasional competition in our chosen sport.
Defend the title in 4 years, watch this space.
Paul. 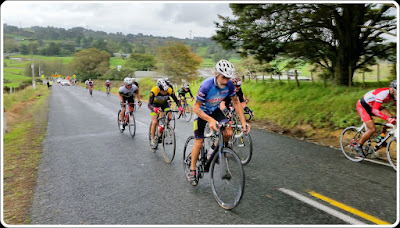