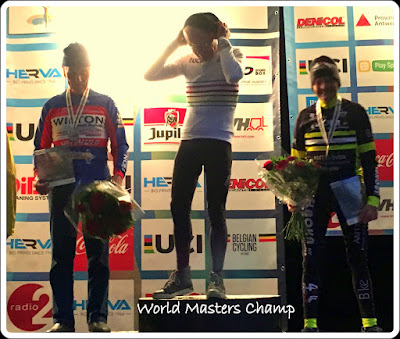 Departed from Hull on the P & Q Euro port overnight ferry Wednesday night to arrive at my digs in Lommel mid- day Thursday. Lommel is an affluent small Belgium town I estimate about 40 km east of Antwerp and 12 km from the Race Venue Zilvermeer nr Mol.

Zilvermeer is what can best be described as a Center Park. With Lakes, pine forest and lots of sand. One small water lake as a semi circle of beach sand with it the normal water fun features. I arrived at Zilvermeer early afternoon to souse out the new circuit. I’ve previously ridden Zilvermeer as I recall 5 times between 2005 and 2010. During that period the circuit only had minor changes. It comprised 3 deep sand section interspersed with fast hard packed ground, tarmac sections, with small climbs and 2 sets of steps. I estimated the circuit required maybe 200m running the rest was rideable although some sectors were narrow. Since then UCI rules require a circuit must be at least 3m wide to ease passing and reduce rider blockages. Also a number of new buildings had been erected resulting in a complete revamp of the circuit.

First reaction more deep sand, lots of man-made obstacles. Circuit length approx. 3 Km with some tarmac sections, nice twisting loops through pine trees, plank soil steps followed by sharp soil descent and climb to eventually reach the beach. Close to 200m running to the water edged where you could jump back onto the bike, riding the hard packed sand around to the next deep sand section. Run through the sand to a small retaining wall over and back through some rideable sand to a loop the loop section. There were 3 man made loops great for TV basically climb up ride part or all loop back down and up again. After the last climb you turned into a sharp tricky fast descent (see pic). On first practice lap I ran down but I road it next time the trick was to try and hit the bottom diagonally to avoid a 360 roll. Ridding meant you had some momentum into a steep deep sand section with the bike on my back and it was up the stairway to heaven. Sharp right running down the sand to the bottom jump onto a fast rideable section to turn sharp right onto the beach. Run again to waters edge to ride maybe 100m off again to run through the pit section sharp left to leave the sand back on until you hit the auditorium steps. After the steps all rideable back to the road start. My concerns, too much running maybe 800m in deep sand very tiring. Decided 2 laps were enough, save my energy for tomorrow. 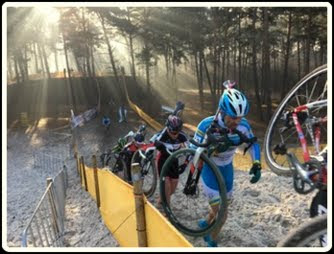 Arrived at Zilvermeer 11.00 checked bikes out, set up turbo, started warm up at 12.15 and completed by 12.45 off to pits to drop off spare bike to arrive at grid start around 12.50.
We are all announced and then told around 40 would start first combining 3 age groups + 65, +70 and +75. We are advised that we are at the back of the grid Mick Ives was there but my eyes were on Martin Herman’s the Belgium who had previously always finished in front of me and normally won, usually by more than one minute. I exchanged words asking him not to start too fast, checked is tyre’s, he had sand tyre’s, those with a fine diamond profile sort you would use on a grass track. I also noted his pressure was my guess around 1.5 bar I was 2 bar? But when I had them lower I was all over the road on tarmac and didn’t see much benefit in the sand, I was on what might best be described as intermediate tyres? Too late I was staying with my set up. My plan, keep him in site and bring him back without going into the red? Easy but could I execute it? Called up to grid commissaries checks tyre width ok, I’m off 'stop!' out comes laptop and his mate scans my down tube and bottom bracket for an electric motor? Better not joke like at my age I need one etc.?

Gun goes, we're off down throgh finish I manage to move up switch right then up steps, Herman passes me and manages to avoid 2 fallers comes out of rise around 20m in front, skill?

I gain some ground on fast section up to the beach.

On the beach jogging to the shoreline no change, remount, Senck (GER) passes me. Don’t panic get by off to jump retaining wall and onto the loops. I stay on down the descent and I’m up the sand bank down and back into the beach sector. I decide it’s easier to push the bike through the deep sand with just a slight weight deflection through the saddle rather than carry.

We exit the sand, I’m catching Herman and at the top of the auditorium steps, I give it a go pass him heading for the end of the first lap. I don’t look back I just keep it a nice steady pace and I’m in the zone on the section to the beach. On the beach and jogging through the beach sector you pass the pits both going out and returning receiving lots of noise from the pit crews. Whilst most cheers are for other competitors this helps me as I can tell the gaps increasing when only minor noise as I pass. 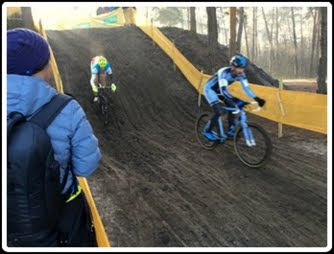 I hear shouts for Barrie Mitchell (Mick Ives team in younger age group) who I passed earlier but nothing for Herman. Confidence increases and I push on and manage to stay in front. Eventually the bell rings for the last lap and I dig in this time the beach sector brings more pain so I jump on near the end and manage to stay upright through some deep sand and realize the power required to make headway is perhaps beyond my fragile frame. I begin to observe that exiting my cleats is becoming more difficult due to sand ingress so to avoid crashing into the steps I decide to release early. Sound decision as I’m just out in time. I give my self a talking to (push with caution and stay upright to the finish) through to the finish line. I’m chuffed but commentator doesn’t verify my position. So I clamber up the steps to the finish booth to check position and am advised yes I’m first.

Podiums for all the days men’s and woman’s age groups are at 16.00. I arrive at 15.45 and eventually find the collection tent. It’s been a good day for the Brits with Dave McMullen, Vic Barnett and Tracey Fletcher also winning their age groups. Eventually we are called to the podium but we have a dispute. The commissaries results shows Van De Sluijs (NED) is 2nd Wilfred Senck doesn’t agree, eventually its clarified and we are on the podium to collect our medals flowers and pendants.

Unfortunately by the time we arrive its dark and my iPhone pics are crap. But Peter says he can edit them so I’m sending pics and report to Peter who I hope will place it on our blog. (tried my best John but you are correct when you say they're crap, Peter)

Posted by petehorne at Saturday, December 10, 2016