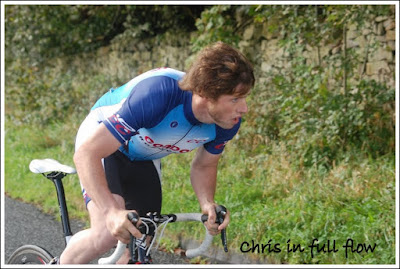 Busiest Condor this past weekend was Chris Smith, pictured above at the first of his four hill climb events, the Rivington Pike climb on Saturday morning. Chris finished 7th overall on the climb, at least thats what the finish sheet says, but Chris is not so sure. He has reason to believe that the timekeeper completely missed him crossing the line and he was awarded his time of 8min 40.8secs only after a protest. 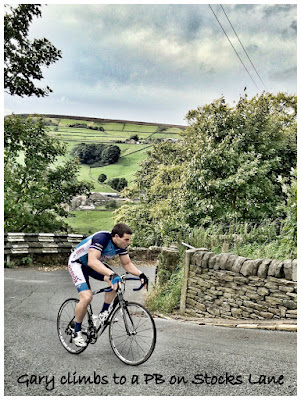 After a quick lunch of salmon and pasta Chris was back to more familiar ground at the Halifax Imps climb on Stocks Lane at Luddenden, a very well supported event where he had, not just numerous Imps to race against but also opposition from within our own ranks in the form of Gary Mitchell, seen above on his way to knocking over 20 seconds from his best time on the climb. Chris finished with a time of 6min 00.6secs for 15th overall whilst Gary was 27th with a time of 7.42.5.

On Sunday Chris went west, taking part in the Lancaster Road Club's double header. Kicking off with the well known Jubilee Tower climb at mid day Chris grabbed 7th overall with 8.35.6. Then a couple of hours later he faced the shorter but steeper climb of Conder Bottoms where he recorded 9th place with 2.21.7. Well done Chris ! 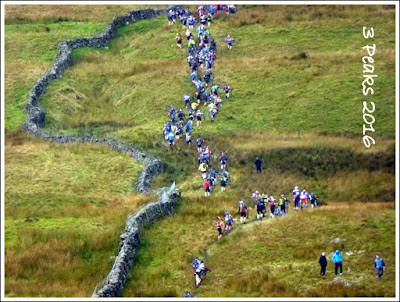 Whilst Chris and Gary were sprinting up short hills Adrian Lord had taken on a very different challenge, the 3 Peaks Cyclo Cross. Billed as 'the hardest 'Cross in the world', few would argue with that description. Adrian recorded a time of 4hr 54min 48secs to place 399th out of the 537 finishers in the race where finishing at all is a huge achievement. If you look at this blog Adrian, we'd like you to do a write up of your day - I know you're a 1st class blogger. 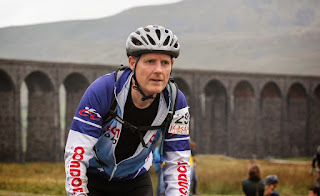 Whilst Phil Haigh continues his recovery from the recent accident he is spending his time either buying new bikes or travelling to bike shows. The below snap is taken on Sunday at the NEC Bike Show at Birmingham where he spotted himself and Neil King on a poster on the stage where Ned Boulting was interviewing Callum Skinner. The picture shows them on the Nick o' Pendle watching last years TOB. 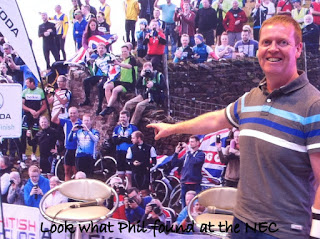 Posted by petehorne at Tuesday, September 27, 2016