Congratulations to Brian who on Sunday overcame the previous weeks disappointment at 'only' taking silver in the VTTA National 50 by conquering all before him in the National 25. Below pic. and report copied from the VTTA Facebook page. 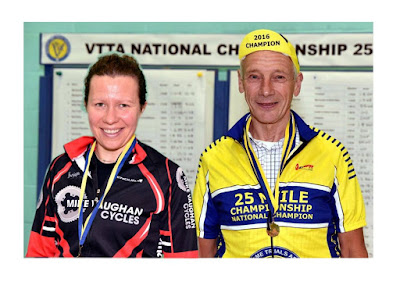 The last of the Association’s Championships took place on a course near Alcester in Warwickshire on the 21 August.
It was promoted ostensibly by the National Committee but its success was down wholly to the work of the Midlands Group under the guiding hand of ex-president Alan Colburn.
Brian Sunter was a clear winner on a windy morning although the threatened rain did not materialise. Brian, a previous champion at 30 miles 100 miles and 50 miles (six times) was delighted to record a gold medal at this popular distance.
David Hargreaves from North Lancashire proved the trip was worthwhile with second, whilst local rider, Philip Brown, took the bronze.
Liz Powell, also a local, was a clear winner from the women with Alison Vessey, a medal winner in every Championship this year, gaining another silver medal. Sarah Soden, from Nottingham was third.
The team prize went to the Yorkshire trio of Brian Sunter, Blair Buss and Tony Stott. 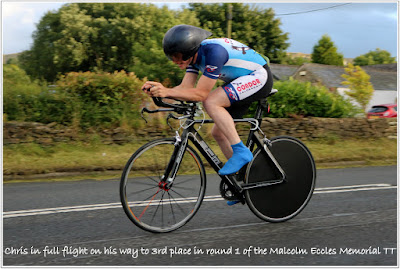 Whilst Brian has been chasing national honors Chris Smith has been riding more local roads taking 3rd place in the Malcolm Eccles Memorial 2 stage TT. Well done Chris, no wonder you dropped me up Park Rash last Sunday (although I'm sure I would have beaten you to the top if I had one of those helmets). Thanks to Jessica Talbot for the photos from the event. 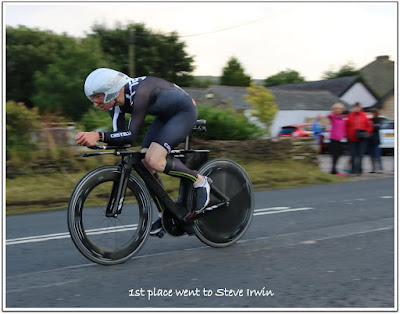 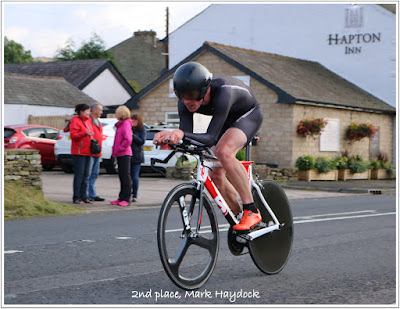