Successful Weekend for the Condor 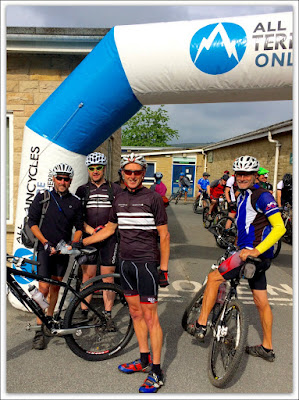 It was our evergreen tester Brian who set the scene for a weekend of success for the Condor when he knocked 51 seconds off the British record for his age when he recorded a time of 54 min 36 secs in the Yorkshire Road Club 25 mile time trial on Sarurday.

Sunday saw the 1st ever 3 Dales Mountain Bike Challenge, a 39 mile ride from Wharfedale School at Threshfield. A super route taking the ride west along the bridleways towards Bordley and Mastiles Lane then round the Settle Loop of the Pennine Bridleway and the over the exposed tops and down to Littondale followed by a couple of stings in the tail with a hard little loop from Conistone to Grassington, then to the surprise of many, instead of going back to Threshfield we took a left turn up the road to the old mines at Yarnbury and down to Hebden.
We had a good turnout from the club. As you can see from the above pic. Nigel, Simon, Mel and Paul bagged places at the front of the starting grid (Ian and Steve Barker were busy warming up and I was on photography duties).
A short time after the start, in fact I think we were still in the neutralized zone, I saw that Paul and Mel were pulling away from us mere mortals in a little elite group. I must admit I expected Mel and Paul to have an event long battle with the younger and in-form Mel to emerge as the victor but this was not to be and the old man of New Zealand emerged not just as the 1st Condor but he was 1st back overall having established a break and worked well with a Spanish lad currently domiciled in Yorkshire. Mel was in 4th place, as it wasn't a race no results have been published but Paul tells me I scraped in the top ten. A strong looking Simon wasn't far behind with Steve, Ian and Nigel all finishing strongly and full of praise for the event. Not a bad result for a ROAD club. 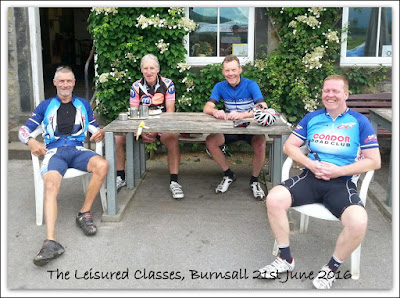