A busy weekend just gone for Condor Road Club riders. Chris Smith seems to have moved up a level this season regularly taking wins and second placings in local mid week 10's he's moving up the leader boards in the top open events. On Sunday, in less than perfect conditions he recorded a personal best time for 50 miles in the Otley CC event at Dishforth recording an impressive time of 1hr 51min 17secs for 10th place overall behind Mark Thaxters winning 1.43.30. Brian recorded 1hr 56min 45secs, a very impressive time as well but I can't find any vets standards results.
Chris had ridden the Bridlington CC Sporting 10 on Saturday doing a 23min 35sec ride. Unfortunately he doesn't know who or what time won the event.

Grimpy rode the Yorkshire Vets Criterium Champs at the York closed circuit on Sunday taking 2nd place in his age category, the winner being former Huddersfield rider Richard Booth. John's having a good season alteady having secured 1st place in the LVRC National Points Series having an unassailable lead with several rounds left to go.

Simon continues to chip away at his 10 mile PB on the challenging Sovereign course on the Penistone road south of Huddersfield recording 26min 47secs last Thursday evening.

In the 'not supposed to be a race' events Gary Mitchell and John Lumb (the 2nd) had a good night out taking part in the Calderdale CTC, Morcambe Midnight Madness ride, both amassing 130 odd miles at a brisk pace in what I understand was good weather conditions. This event had been off my radar but by the sound of it was a great success, we'll have to endeavor to whip up enthusiasm from more Condors next year.

Looks like Mel was on good form in the White Rose Classic 112 mile Sportive on Sunday recording an average speed of 17.6 mph for the route which includes about 10000 ft of climbing over such Dales Classics as Fleet Moss and the Coal Road. 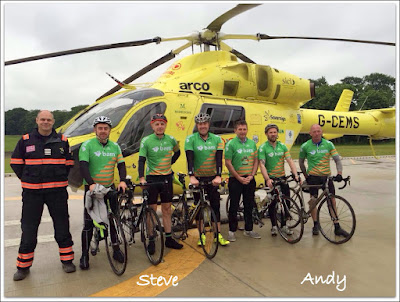 Topping the Condor leader board last week for both the distance ridden, longest single ride and altitude climbed was Steve Thewlis with 394 miles, 158.7 his longest single ride and 23,156ft climbed. Steve rode the Coast to Coast Cycleway with others from his employers, BAM Construction, raising money for the Yorkshire Air Ambulance. He also rode to the start and home from the finish.
Also riding with the Bam team was occasional Condor guest Andy (I understand he's saving up to join the Condor).

Good to see Damien getting keen again and topping 300 for the week, and including 22,661 ft of climbing.

Just a reminder again, its Grimpy's road race this coming Sunday and marshal's need to be at Greetland Community Centre for 9am to be allocated their duties.