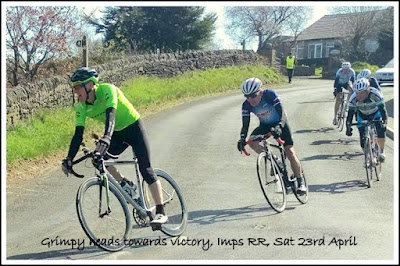 Thanks to Sarah Burbridge for the above pic. from last Saturdays LVRC Derek Smith Memorial Road Race. It was fitting that two of Derek's old sparring partners, Condor's John Ginley and Brian Sunter took 1st & 2nd respectively in the over 70's age group. Also there, in the over 50's race was Mel Hartley, looking fit and tanned following his recent Mediterranean holiday training camp he took 4th in his category following an impressive amount of work at the head of the bunch chasing an early breakaway.

Grimpy's been in fine form in recent weeks with a fine win the previous week in the CC Luton Claydons Spring Classic, a round of the season long Percy Stallard National Series.

Whilst Grimpy's been taking the honors in road racing Brian kicked of his 2016 assault on the Vets National Championship Time Trials with a fine bronze medal in the 30 mile event in Kent on Sunday 17th April ( although he was not overjoyed himself, saying he hadn't really traveled all that way for 3rd place - and being that defending champion I suppose he can say that).

A full day out for the long distance brigade yesterday in the Red Rose 200k Audax, superbly organised once again by Dave Dodwell and CTC Calderdale. I was joined on the ride by Condors, Steve Thewlis, Pete Whiteley, Chris Smith and Garry (The Badger) Traviss, and also accompanied by guest riders Niall Smith (his longest ever ride - and still looking worryingly fresh dancing on the pedals as he rode off and left me on the climb up from Luddenden Foot towards the finish at the Oddfellows Rooms in Halifax), Andy from Maverick Velo, showing his best ever form this season, honed on Calderdales finest Cobbles during our RVC recce' ride a few weeks ago, plus Elland rouleur Gary Mitchell.
The day wasn't without its problems, three punctures for Pete, one for Niall, and a bit of aggro in the bunch for Garry, but nothing The Badger couldn't deal with - his left crank also fell off, he was fortunate to have Steve and Andy to look after him, they'd sort of formed an alliance after dining together at Glasson Dock, enjoying cheeseburgers, and tea out of polystyrene containers, standing in the rain by the greasy spoon caravan  whilst Chris and I forked out an extra quid for waitress service and fine dining in the Lantern O'er the Lune Bistro (which we can recommend, good food and very welcoming).
After 70 miles of head wind to get to Glasson Dock I was expecting to be blown back to Halifax, this was not the case, yes it was predominantly a helping wind but there were sections, especially along the Calder Valley where the flags were blowing towards us.
There were some tired looking faces at the end but all agreed that it had been a good day out.