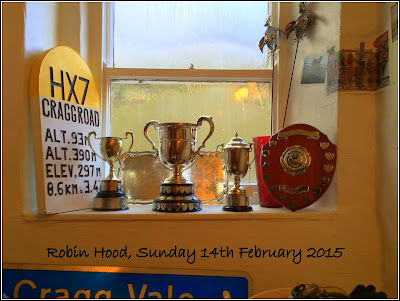 A really good turn out of Condors assembled at Denholme Gate and Keighley, thankfully in really good weather, to put in a 50 mile loop to get to the lunch and presentation being held again at the Robin Hood, Cragg Vale. We split briefly just after Crosshills, whilst the Hartley twins led a quartet of grimpeurs over the hills to Black Lane Ends the rest of us enjoyed the tail wind through Cowling and over the Moss for morning coffee at The Old Rock Café at Trawden where we regrouped.
From Trawden we checked out a section of the forthcoming Imps Reliability Ride route through the fords at Catlow Bottoms. The fords didn't claim universal approval, utmost care being needed for the 1st water splash which has been damaged by recent flooding but it was the 2nd ford that claimed our only casualty when Garry's wheel got stuck in a gap in the cobbles resulting in him falling from the bike but fortunately being unharmed.
Richard then wound the pace up at the front, straight down the Valley (except Mel & Robin who took a detour round Deerplay and Sharneyford) ensuring we made it to the pub shortly before 1pm. 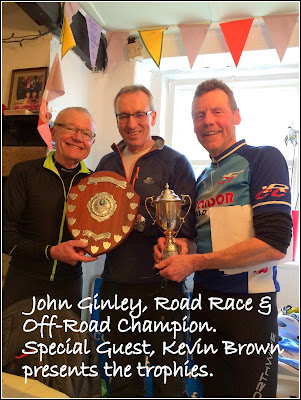 John Ginley (better known as Grimpy) took both the Road Race and Off-Road Trophies. Notable results for 2015 being 2nd in the BC National RR Champs, 2nd in the LVRC Percy Stallard Series, 4th in the LVRC National RR Chanps. John feels he could have done better but struggled with a knee injury later in the season.
He was the 2015 National Cyclo Cross Champion and 3rd in the World Championships in Switzerland. His 2015 winter campaign was blighted by knee and calf injuries but he now appears to be back to top form and keen for the 2016 season to get underway.
In 2015 he also returned to mountain biking taking 5th place overall in the Mary Townley Loop CX Challenge  and 3rd place in the BC MTB Champs on the London Olympic Course in July. 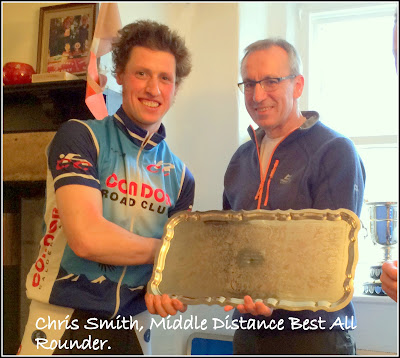 Our Middle Distance Champ was Chris Smith (better known as Padiham Chris). Purchasing his 1st TT bike early in the year he took the trophy with a 22.24 '10' , a 58.40 '25' and a 1.57.56 '50' and a 4.06.15 '100', giving him an average speed of 25.12 mph.
During the season Chris took 11 wins out of 17 starts in the Rossendale evening 10's, a record number of wins in a single season.
He had a full Hill Climb season taking a win in the West Pennine climb on Blackstone Edge and representing the club with credit at the National Championship.
He also managed to pace the author round several Audax's and gain an elite finishing time in the Fred Whitton Challenge. 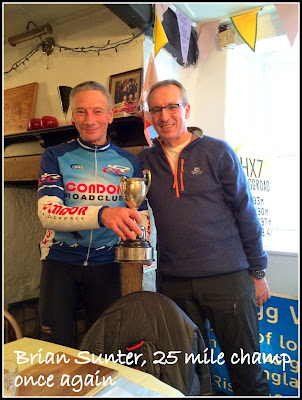 Brian Sunter had a remarkable season re-writing the record books again. Winning our 25 mile trophy for the umpteenth time with a time of 55.53 does not really reflect the scale of his achievements. He made his target the VTTA National Championships gaining 2nd on age standard in the '10', setting a new British age group of 21.14.  He was also 2nd in the '25' with a time of 56.11. In the '30' he took the gold medal with a time of 1.08.55 and also took gold in the '50' with another national age record of 1.50.53. 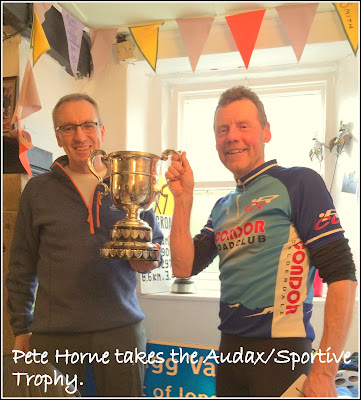 I managed to amass the greatest distance to take the Audax/Sportive Trophy with Mel 2nd and Steve Thewlis 3rd.