A rough weekend weatherwise, as bad a weather as I can remember  for the North West Passage on Saturday with wind, rain and low temperatures making it a challenging day for the 80 odd starters. However, as usual for this event which we have been taking part in since the 70's, the Condor were well represented with Ian, Nigel, Mel, Chris, Adrian and myself toeing the start line at the Spring Inn for the 8am start of the 200. I know Steve rode the 120k route starting at 9am but I'm not sure whether Lumby and Mick White made it or not.
Actually it was dry at the start but as forecast the rain started at about 9. Chris and I had stayed out of trouble by sitting at the front as far as Tod before swinging off and letting Mel and Ian through. The pull up through the valley to Clivinger went well but after the scissors junction on the outskirts of Burnley disaster struck for me when I unshipped my chain jamming it to such an extent that I had to stop and get my hands dirty. However it did give me a chance to put on my rain jacket ( although by this time I was wet through anyway ).
The next 20 or 30 minutes were not what I really needed; in the red zone chasing to get back to moto 1. With the assistance of strategically placed traffic lights I managed to make contact but then the Greystone climb loomed and the big guns (Nigel, Mel and Mel's mate Neil) rode away as I struggled with the gradient. I was happy to make it to the summit with Chris and Ian but my plan to recover on the descent to Gisburn was in tatters when Chris and Ian decided to do bit & bit downhill into the driving rain. Their plan worked as they caught the front runners ( except for Nige who'd gone for a solo break - probably a little early with 100 miles still to go ).
All had been going well on the road between Gisburn and Long Preston before Mel went to the front and split the peloton to tatters. Ian and I worked together to minimalize our losses and were all reunited by the Naked Man check. We weren't reunited for long though as Flat Earth Bob sneaked away chased by Mel, Nige etc; Ian and I decided to eat our bananas whilst stationary whilst Chris hung around waiting for us although he rode away from us accompanied by Charlotte, a young woman in a British Cycling Talent Team top, who is, as the jacket said, talented, as soon as we hit Buck Haw Brow.
Ian and I worked well together up the A65 battling the headwinds and rain, pulling back Charlotte and almost making contact with Chris before he decided to press on the pedals a little harder. Mel and Neil were just leaving the Devils Bridge check as we arrived but Nigel wisely chose our company for the 2nd half of this epic. We four Condors kept a nice pace going, down the Lune Valley, through Lancaster and down the A6 to the next check at Scorton where we all agreed, contrary to the original plan, to stop for a pot of tea and a bite to eat at the café. Mel and Neil had obtained their proof of passage from the shop and were almost ready to attack the last leg as we ordered our soup, scones and tea.
We were joined in the cafe by a near hypothermic Charlotte who had dropped off the back of our train and missed the Scorton turn off thereby adding a few unwanted miles to her test of character. She was in such a state that we felt unable to leave her, Ian helped her by eating half her scone before we left as a fivesome to attack the remaining 40 miles, picking up several more lost Audaxer's on the way. [comment: said demi-scone was offered to all of us, but I was the only one who volunteered to assist! - Ian; ps, thanks for this write-up Pete]
The remaining miles, probably due to the café stop, seemed less arduous although I was found wanting on the Oswaldtwistle Moor and 'Owd Bett's climbs my team mates waited for me and we finished together. Mel and Neil had set the fastest time for the day but there was only a couple of other  finishers in front of the Condor Train. After pie & peas Chris set off to ride home thereby topping 150 miles for the day as preparation for the 3RT Reliability Ride the following day.

Just 3 condors for the inaugural 3RT reliability trial. A total field of around 70 riders (but this was the day after the North west passage)
Me (Phil H) Chris Smith and Garry Traviss. Chris was taking it easy after yesterday's exploits. Garry must have decided to make it harder, turning up on and old bike with 53/39 and 11/23 gears. Not ideal for a lumpy route, but he's made of tough stuff.
The expected tailwind out didn't seem to arrive and much of the day was spent battling severe crosswinds, especially over the tops. It was pretty dangerous in sections.
Anyway, true to form, Chris ride on the front nearly all day and Garry's gears took their toll towards the end.
The weather forced some riders to shorten the route and we were a fair bit behind the 3RT racing contingent for the pie n peas.
A great day out though. 😄 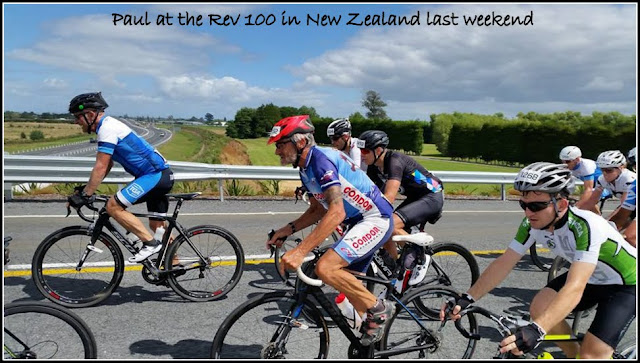 Whilst the Condor's Northern Hemisphere team were battling adverse weather over the weekend Paul Daly was enjoying sunshine and super form in the Rev 100k road race down in New Zealand. Run as an adjunct to a prestigious pro road race Paul conquered all before him in his age group and finished high up overall. He'll be back over here in the UK for 4 or 5 weeks come May - you have been warned !!!!!!!!
Posted by petehorne at Tuesday, February 23, 2016