Thanks once again to Chris Crossland and CTC Calderdale for promoting the Season of Mists Audax last Sunday. To add to the organisation which gave us a great route and rider care beyond comparison we were blessed with an ideal autumn day (which hopefully has banished the nightmare memories for some of the weather on Spring into the Dales).
The Condor were once again there in force, I won't try to mention everyone because I would no doubt miss out some names but a few names must be recorded on this blog. Firstly Paul Gower, who only days before his 78th birthday attacked what must be the hardest 100k events in the country and completed it with a smile on his face. He was kept company be Peeps, who although 4 or 5 years younger than PG was only days away from having a new knee fitted (hope its all gone okay Paul and its not too long before we're having to reprimand you again for winding it up on the Wednesday ride).
Another ride of note came from Steve Thewlis who I believe is the only person to have completed every edition of the event (please correct me if I'm wrong Chris). Steve was looking strong but disappeared after the last check at Colden Tea Rooms having problems with the drive chain and broken rear changer hanger. After spending some time converting the bike to single speed he finished the event with a broken chain stay on his carbon Trek.
At the sharp end Graeme Brown blew the field apart on the first climb up to Heptonstall but was soon joined by Mel together with our old mate Mark Sadler, now in the colours on HD Revolutions. I understand that Mel was the driving force and was there at the end to perform the traditional breaking of the skin on the rice pudding.
Personally, after a struggle up through Heptonstall I settled down with clubmates including Ian, Garry Traviss, Phil Haigh and Steve T plus Simon and Chris S who both had to short circuit due to other commitments, Simon at the BMX track at Manchester Velodrome and Chris had an appointment with The Rake at Ramsbottom. We had frequent meetings with Potholer Bob of CTC Calderdale who pulled no punches when expressing his opinion of cyclists who ride in groups and insisted on riding behind us up-hill and in front down-hill. We also had the pleasure of riding with the 3RT boys who we found loitering on a street corner in Chatburn looking lost. They were good company until half way up Widdop when upon realising they were no longer lost the speed went up and I was left floundering.
I could ramble on for a long time about an action packed 4¾ hours but its my bedtime so I won't.

Whilst one event per weekend is plenty for me Chris managed to fit in three; Jackson Bridge and Holme Moss hill climbs on Saturday and The Rake on Sunday. After his victory on Blackstone Edge the previous week he was up against the top climbers in the country in these events and although he didn't get any brown envelopes filled with cash this week he proved his progress by beating last years times. Keep it up Chris, you're doing a great job flying the flag for your club. 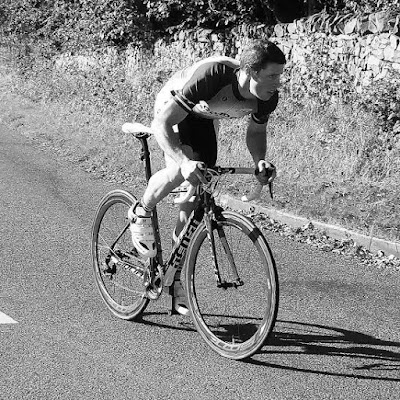 Its a descent weather forecast for this coming Sunday so to make the most of the fag-end of the cycling year I've planned and exciting 200k circuit starting in Brighouse and travelling through the lanes to the south of York for a café stop at Pocklington and the returning through the lanes to the north of York, over Aldwark Bridge and through Wetherby on the way home. Only myself and Simon have shown the necessary enthusiasm so far but if you fancy joining us be at Sainsbury's Roundabout in Brighouse at 8am.

I understand that Ian is planning a MTB ride on Sunday meeting in Hebden Bridge, possibly calling in at Shibden Park on the circuit to spectate at the Rapha Cross (where Grimpy's racing, plus possibly Robin - I'd better let Ian update the blog on that one).  I'm going to bed.
Posted by petehorne at Thursday, October 15, 2015