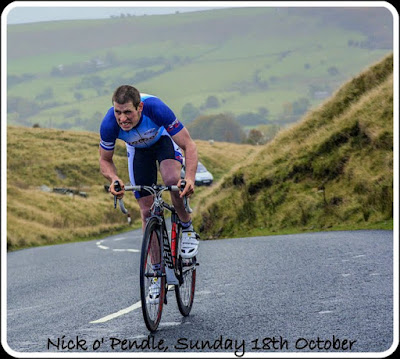 In his final preparation for next Sunday's National Hill Climb Championship Chris was thwarted by the cancellation of the Nelson Wheelers Hill Climb on Saturday, Chris was restricted to only one race at the weekend, the Nick o' Pendle Climb on Sunday. With a head wind up the Nick he recorded a time several seconds slower than last year but achieved 10th place overall behind comeback man, former multi national champion, Jim Henderson. 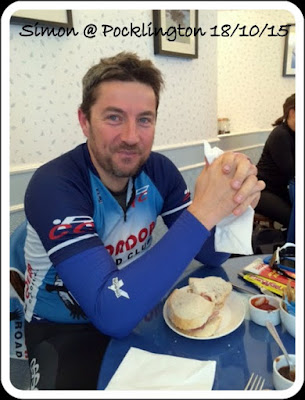 Whilst Chris was sprinting up the Nick, Simon and I were enjoying cycling at a more leisurely pace with a circuit around the Vale of York. After the superb Autumn weather we have been experiencing for several weeks the conditions were a little disappointing, with damp roads and drizzle I chose the mud-guarded Audax bike. Unfortunately several weeks of riding the best bike had softened me up and the bike felt to be sticking to the roads, a problem not shared by Simon who was getting stronger as the day progressed, as illustrated by the fact that when we split after 130 miles he rode to a Strava PR on almost every segment for the remaining miles.

Sunday 25th October
Its the National Hill Climb Champs this coming Sunday, on the Jackson Bridge climb, near Holmfirth. Amazingly 240 entries have been accepted with the 1st rider off at 10.30am, with the riders starting at 1 minute intervals that's 4 hours. I was pleased to see that Condor's only representative, Chris has been seeded to start with the fast men near the end of the field, number 225, with a start time of 2.15pm.
This gives us the opportunity to have a good ride before getting to Jackson Bridge to give Chris vocal encouragement so I'm suggesting we meet at Elland Bridge at 8.30am (that's a good sleep in as we turn the clocks back Sat night).
Posted by petehorne at Tuesday, October 20, 2015