Peak is oft used as an adjective for performance, but yesterday it just meant the end-point of steep slopes of grass, or of rock, or of a rock/grass mix, all of which shared the common quality of being interminably long.

I set off with Jamie (from that there down South with all its well appointed refinements) in what must be one of the warmest ever starts of the event. With admirable restraint, showing the wisdom of my years, I took the start as a prelude not a finale. Jamie shot off, and was next seen going down Pen y ghent as I was ascending, still in my 'prelude' mode, though now apparently knackered despite having been assiduous in my commitment to easy rider-dom. Strange that.

In between I had managed to take some time off the 'racing' to look over the inversions marking the valleys beneath Ingleborough. The restful mist felt quite alluring in contrast to my gel-fuelled, stuttering movement. Then down over soggy turf, watching riders take 'headers' into hidden sink holes and somehow avoiding such myself, up the steps of Whernside whose differently spaced risers were clearly there just to piss you off, down the rocky drainage ditches and along sneaky pathways to one side or other that avoided all the sharp edges and sharp tongued expletives, along the road to the foot of Pen - y - Ghent having been gathered into what seemed like an Ilkley Club cycling train complete with a very clean engine, then, after seeing Jamie coming down, pretty much coming to a halt myself as cramp (first time ever) set in.

More gels sorted that out, then descending up top at a rocky bottle neck I got a rear puncture (tired rider error of course) which at least meant I could rest a few minutes whilst fumbling with canisters that stuck to the skin (forgot about them being so cold). A rather too cautious descent down the remainder of the hill (the slight paranoia of a repeat puncture) found me coming into Helwith Bridge at 4hrs and 20 seconds, 156th.

Jamie had been 'in' a good while, but had the patience to be waiting to introduce me to his mates who had a picnic hamper at the finish replete with olives, stuffed sun dried tomatoes, knäckebrød and mackerel paté, which was pretty empty by the time we finished with it. I guess any watching Condors had long since flown by then. Onto next year now, where I will have, I think, a different strategy from 'taking it easy'; advice welcome as to what it should be: 'train for it properly'; 'don't bother ...'; 'ride with a smile'; etc. etc..

We were there. And have a picture to prove it. You were even seen and noted at the finish, Robin, but looking rather a wizened and hollow husk. You went straight past your cheering clubmates, pints in their hands so unable to applaud, perhaps headed toward the promise of olive-stuffed tomatoes and whatever else it was you mentioned - I don't even have those fancy foreign letters on my keyboard. Anyway it was a fantastic warm dry day for this time of year and we all had a lovely time. Ian. 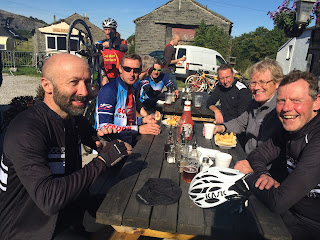